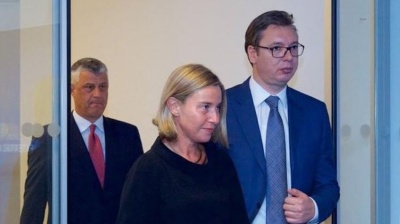 A previous meeting between the presidents of Kosovo and Serbia, under the aegis of the EU.
By Valentina Dimitrievska in Skopje June 23, 2019

The Paris summit due to be held on July 1 as part of the Serbia-Kosovo normalisation talks has been canceled, Kosovan President Hashim Thaci announced on June 22.

The aim of the summit was to find a way out of the stalemate between the two countries after Pristina imposed 100% tariffs on products imported from Serbia.

Previously there had been talk of the two sides nearing a negotiated solution more than a decade after Kosovo unilaterally declared independence from Serbia. However, the imposition of the tariffs worsened their already strained relations. Officials from Serbia and Bosnia — whose exporters are also subject to the tariffs — say they are considering taking countermeasures if Pristina refuses to revoke its 100%  the tariffs are not lifted by July 1.

The summit was due to have been hosted by French President Emanuel Macron and German Chancellor Angela Merkel and attended by Thaci and Serbian President Aleksandar Vucic.

Serbia wants Kosovo to lift the tariffs, while Kosovo says that it will do so only if Serbia recognises it as a separate country.

However, Thaci in a Facebook post on June 22 blamed Kosovan institutions for the cancelation of the summit.

"The hasty, uncoordinated and wrongful decisions and actions of the Kosovo’s state institutions have severely damaged the respect and support of our Western partners for Kosovo," Thaci said without elaborating.

"Consequently, our international partners, unfortunately, hold Kosovo responsible for blocking the dialogue, for failing the scheduled meeting in Paris and for postponing the decision on visa liberalisation," he added.

For Thaci, the cancelation of the summit is step backwards for Kosovo’s European future

He also urged the EU and the US not to stop their efforts for resuming dialogue and reaching a peace agreement.

Before the cancelation, Vucic also raised doubt as to whether the Paris summit would be held at all.

Reaching a settlement is a condition for both countries’ progress towards EU integration. Serbia is in the midst of accession negotiations and has a tentative target accession date of 2025, but reaching this target will be impossibly without an agreement with Pristina. Meanwhile, Kosovo is the furthest of the Western Balkan countries from EU accession as it is not recognised as an independent state by five EU member states.