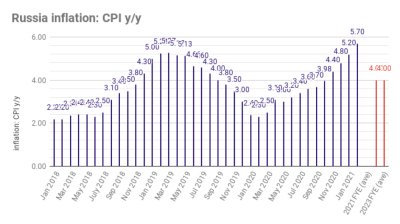 Russian consumer inflation peaked at 5.7% in February, driven by rising food prices, and is now well over the CBR 4.25% preferred rate, but it is expected to fall in the coming months. / wiki
By bne IntelliNews March 9, 2021

The CPI rate reached 5.7% year on year in February, the Central Bank of Russia (CBR) reported on March 5. This marks the highest level since November 2016.

Monthly inflation jumped to 0.8%, well above consensus estimates of 0.6% month on month.

Last month, prices of non-food consumer goods increased by 5.7% y/y, while the cost of communal services to the population rose by 2.9% y/y. Core inflation increased by 0.6% m/m and 5% y/y.

“CBR will wait for a change in [the] inflation trend at its March meeting. The current level of inflation is well above the CBR’s key rate (now 4.25%), which does raise questions regarding the effectiveness of the bank’s inflation targeting policy,” BSC Global Markets chief economist Vladimir Tikhomirov said in a note.

“However, in its recent communications, the regulator viewed the spike in inflation as a temporary phenomenon, although it forecast CPI to peak at just 5.5% y/y in February,” Tikhomirov added.

The inflation spike was driven by a combination of factors, including low base effects for annual price growth comparisons, the devaluation of the ruble in 2H20 and a rise in global prices of food and energy.

The CBR forecasts that the CPI trend could reverse as soon as next month when the base factor reverses and pressures from the ruble’s devaluation start to subside.

“We share the same view and, therefore, believe that the latest spike in CPI rate is unlikely to trigger a reaction from the CBR, at least not at its next scheduled meeting (19 March),” Tikhomirov said.

“At the same time, we think that in case the inflation rate turns out to be sticky and does show significant moderation in April, CBR might consider a 25-50bp hike to its key rate already at its meeting on 23 April. We estimate the chances for a rate move in April at 45%,” he concluded.