Russian car sales plunge 7% in May 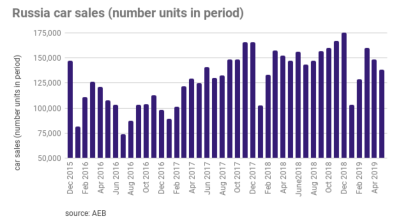 Sales of new passenger cars and light commercial vehicles (LCVs) in Russia decreased by 6.7% in May 2019 to 0.138mn units, the latest report by AEB Automobile Manufacturers Committee (AEB AMC) shows. In January-May overall the market declined by 2.2% to 0.677mn vehicles.

This makes the second month in a row that car sales post decline, with the negative market dynamic previously promoted fears that the slow recovery in the car market might be running out of gas due to stagnant real income growth and bringing back the memories of the car market plunge in 2015-2016.

"No good news from the automotive market in May, instead a nearly 7% drop in sales volume - the most noticeable year-on-year loss in over 2 years," the head of AEB Joerg Schreiber commented.

While "the extraordinary warm weather this year is not helping retail sales as many people spend more time than usual away from the big cities and their shopping malls," the "main reason of the current trend however remains a weaker retail demand, driven by macroeconomic factors such as rising household costs in the wake of the VAT increase earlier this year," Schreiber argues.

In addition, the automotive market is still digesting a substantial reduction in government subsidies stimulating retail purchases in the past, creating "a rather challenging environment."

Avtovaz, which previously posted growth against volatile market, in May posted flat sales at 28,700 vehicles. Out of top 10 best selling models in the reporting month (all locally produced) only Skoda posted growth of sales of 17% to 7,000 vehicles.

December figures may point to the high inflation beginning to subdue consumption or to households holding back spending after increased spending in November.

The expansion shot up well above the consensus line of 13% y/y.

The PPI climbed to the highest point since the late 1990s.

Trade gap widened by 24% y/y to $5.83bn – which represents nearly one third of the estimated GDP last year.

Growth of output prices in Slovenia accelerates to 10.6% y/y in December

The producer price index (PPI) started to increase rapidly at the beginning of 2021.