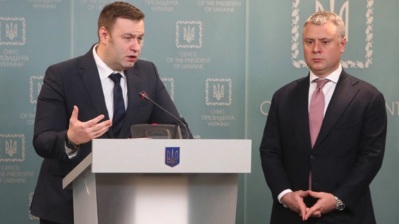 Ukraine’s Energy Minister Oleksiy Orzhel (left) and Executive Officer of Naftogaz of Ukraine Yury Vitrenko (right) get a new deal from Russia to transit 65bcm via Ukraine in 2020, falling to 40bcm in 2021-2025 and pay the Stockholm $2.9bn award in cash before the end of the year / wiki
By Ben Aris in Berlin December 21, 2019

Ukraine and Russia have agreed on the principles of a five-year gas transit deal that still needs to be signed before December 29 just as the first US company suspended construction activities on Nord Stream 2 pipeline after new sanctions were imposed on the project on December 18.

Ukraine’s Energy Minister Oleksiy Orzhel confirmed that Ukraine and Russia will sign a five-year gas transit contract before the end of the year during a press conference on December 21 in Berlin.

The deal involves the transit of a minimum of 65bn cubic meters of Russian gas flowed through Ukraine’s territory in 2020. The minimum will drop to 40bn cubic meters for each of the subsequent four years.

In addition Russia has reportedly agreed to pay Ukraine’s national gas company $2.9bn that is part of the Stockholm's arbitration court order to Russia’s gas giant Gazprom to pay compensation of $2.6bn to Naftogaz in a judgement at the end of 2018 that the two sides have been wrangling over ever since.

It was significant that the deal was struck in Berlin and comes within two weeks of the first Normandy Four meeting in Paris on December 9 where Russian President Vladimir Putin met not only Ukrainian president Volodymyr Zelenskiy for the first time, but also German Chancellor Angela Merkel and French President Emmanuel Macron, who have stood behind Zelenskiy efforts to rescue some sort of transit deal.

Ukraine earns about $3bn a year from transiting Russian gas or about 4% of GPD and as bne IntelliNews reported the authorities hiked transit tariffs on domestic producers four-fold last week in order to make up a short fall that would have probably thrown Ukraine’s economy into recession in 2020 as a result.

The deal represents a big victory for Ukraine. Kyiv had been holding out for a 10-year agreement, whereas the Kremlin had offered only a one year deal in its pervious public remarks. Zelenskiy said after the Paris summit that Kyiv was prepared to compromise and suggested a three-year deal, so a five-year is a significant advance.

But Ukraine will also take a hit as the 65bcm guaranteed transit minimum is less than Ukraine flowed this year. Russian sent 87bcm to Europe via Ukraine in 2018 and will sent an estimated 90bcm in 2019, to the flows will be reduced to two thirds of current levels in 2020 and less than half in 2021 to 2025, falling by approximately the amount of capacity that will become available when Nord Stream 2 comes online, which can flow 55bcm a year.

The deal is agreed, but not signed and the final details and mutual claims must be settled before December 29, Executive Officer of Naftogaz of Ukraine Yury Vitrenko said during the press conference.

"We must sign everything before December 29 so that there will be transit from January 1," he said. Vitrenko called it "a very difficult task," emphasizing that the Ukrainian side will "work hard on this," as cited by Tass.

Vitrenko noted that it was "about new agreements on European principles," the preparation of which involved "international lawyers on both sides."

The US put new sanctions on the Nord Stream 2 pipeline and promised to fine any companies participating in the project, which it admitted in almost the same breath have come “too late” to stop the pipeline from being completed.

Sanctions against the Nord Stream 2 and TurkStream gas pipelines, included in the US military budget for the 2020 fiscal year signed by US President Donald Trump came into force on December 20.

Switzerland-based Allseas, pipe-laying company for the Nord Stream 2 pipeline, immediately suspended its pipe laying activities saying it needed to consult with the authorities.

“In anticipation of the enactment of the National Defense Authorization Act (NDAA), Allseas has suspended its Nord Stream 2 pipelay activities. Allseas will proceed, consistent with the legislation’s wind down provision and expect guidance comprising of the necessary regulatory, technical and environmental clarifications from the relevant US authority,” Allseas said in statement.

However, with over 90% of the undersea pipeline completed both Gazprom and analysts are confident the pipeline will be completed sometime in May. There is no deep-water sections left to build and the most technologically challenging construction is already completed, which is where the international companies working on the project play a crucial role.

Russia will “continue to implement its economic projects,” despite sanctions, the Russian Foreign Ministry said in a statement on December 21 in connection with US sanctions against the Nord Stream 2 and TurkStream gas pipelines.

The US officials admit to having little leverage to stop the completion of Russian Nord Stream 2 pipeline to Germany, Bloomberg reported on December 18 citing unnamed senior administration officials.

The Kremlin responded angrily to the new sanctions. The Russian Foreign Ministry said in a statement that the US is seeking to deprive its European allies of "guaranteed sources of supply" of energy from Russia with the sanctions.

"Russia has implemented and will continue to implement its economic projects regardless of anyone’s sanctions," the diplomatic service said, as cited by Tass.

The Ministry added that the United States, by imposing sanctions on the Nord Stream 2 and Turkish Stream (aka TurkStream) that is the southern part of the trident of pipelines designed to delivery gas to Europe, is trying to “deprive its European allies of a guaranteed supply of energy from Russia and to impose its liquefied gas.”

Turkish Stream is also nearly completed and was due to come online in January, but on December 4 Russian President Vladimir Putin lambasted Bulgaria for “deliberately delaying Turkish Stream” due to pressure by the west.

Russia says that the sanctions on Nord Stream 2 have nothing to do with European energy security and are simply the use of foreign policy tools that are primarily designed to boost sales of US LNG on the European market.

Indeed, Gazprom recently reported that gas prices are at a 15 year low of $169.8 per thousand cubic meters largely because Europe has diversified its gas supplies and the rise in the use of imported LNG to Europe, including LNG imports from the US. Over the last decade Europe has already largely diversified its gas suppliers. Gazprom currently supplies 36% of Europe’s gas, down from over 80% in the 1990s thanks to gas market reforms in Europe and the availability of new supplies from things like LNG.

"Moreover, the desire to harm Russian exports is by no means the only or even the most important," the diplomatic service noted. "There is a tendency to impose US liquefied gas on Europe, which costs it much more than pipeline deliveries from Russia, and thereby slow development of economies, undermining the ability to compete with the US in global markets. As a result, Europeans are losing out on all counts," the ministry added Tass reports.

According to Russia’s Foreign Ministry European, not Russian, companies that participate in construction of the Nord Stream 2 and Turkish Stream pipelines will suffer the most. "Washington has decided that for the sake of geopolitical ambitions and commercial gain, you can spare no one, even your closest NATO partners," the ministry concluded.

The United States Senate approved the National Defence Authorization Act (NDAA) specifying the annual budget and expenditures of the US Department of Defence for 2020 fiscal year that starts on October 1, which obliges the administration to impose sanctions on the Russian Nord Stream 2 and TurkStream pipelines. Earlier, on December 11, the House of Representatives voted the document into law.