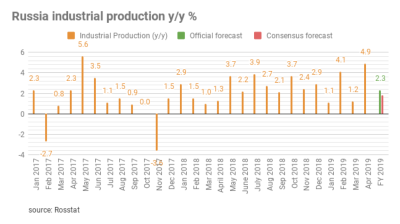 Russia's industrial output growth in April 2019 jumped to 4.9% year-on-year after 1.2% growth in March, according to the latest data by Rosstat statistics agency.

The notable increase in industrial output comes as a surprise, as consensus expectations of economists surveyed by Reuters stood at 1.5%. As reported by bne IntelliNews, first-quarter output and GDP growth came in unexpectedly weak, leaving analysts wondering when will the government spending kick in this year.

Now that industrial output in April showed the fastest y/y growth in the past two years, the data was received with scepticism, scrutinizing Rosstat's bumpy indicators and seasonal factors at play. Without accounting for seasonal and calendar effects, industrial output expanded by 1.4% in April after 0.6% decline in March.

"Industrial production has exhibited some volatility in recent months, which raises some questions about the quality of the data and could result in future revisions," Sberbank CIB commented on May 23.

The very next day Rosstat has revised the released data to 4.6% y/y from 4.9% y/y, less than 24 hours after the official release. The reason for the change was a downgrade in estimates of oil and gas production, the estimate of crude output growth was cut from 7.4% y/y to 2.5% and of natural gas from 16% y/y to 2.6%. The statistics agency claimed that one of the market participants has provided faulty data, and launched an internal investigation on the matter.

"The revision of data so soon after the official release is extraordinary," BCS Global Markets commented on May 24. "However, errors do happen and we see this as a one-off," BCS added, maintaining its 2019 estimate of 2.7% y/y industrial output unchanged.

As reported by bne IntellinNews, Rosstat has been under fire for the quality of its data, especially concerning investment, industry, and income. The head of Rosstat was fired at the end of 2018 and the agency was taken under the direct control of the Ministry of the Economy, which produces its own economic forecasts.

Nevertheless, the revised growth of 4.6% y/y remained much stronger than that showed in March. Uralsib Capital believes that "sharp improvement of April's industrial output numbers is due to mostly one-off factors, such as significant improvement of external market conditions, higher investment activity from large state companies, and increase in working days year-on-year."

BCS also seed volatile April's growth as unsustainable, with a deceleration expected in May that will have two fewer working days year-on-year. This could extend the volatility to 2Q19 overall.

Still, BCS estimates that Russian industry could grow 2.7% y/y in 2019, which is higher than current official (2.3%) and consensus (1.8%) forecasts. However, same as before, the growth is seen helped by stronger public demand – an increase in defence procurements and the start of the implementation of national projects.

In the reporting month the biggest driver behind the stronger output was the Oil & Gas sector: the production of crude oil and natural gas rose by 7.4% y/y and 16% y/y, respectively. "Overall, the resource industry was up by a solid 6% y/y in April," BCS GM commented on May 23.

Uralsib expects the industry to come back to 1%-2% growth range in the short term, with main factors slowing down the industry being increased tax burden in the beginning of 2019. Renewed trade war between the US and China could slowdown global economy and reflect on Russia too, the analysts warn, having a 1.1% forecast for the industrial output this year.

Russia's GDP growth slowed notably to 0.5% year-on-year in 1Q19, down from the strong 2.7% y/y seen in 4Q18 and 1.9% y/y in 1Q18. Slow GDP growth reinforced the weak first-quarter base sector statistics. VTB Capital stressed on March 23 that data following the first quarter will be closely watched as "it could give a hint as to whether 1Q19’s underwhelming +0.5% y/y GDP growth was a one-off, or whether the weakness in the first quarter is going to spill over into the second."

The 0.5% growth is well below the 0.8% expected by the Ministry of Economic Development and 1%-1.5% by the Central Bank of Russia (CBR) in the reporting quarter, and is the slowest quarterly growth since 4Q17.