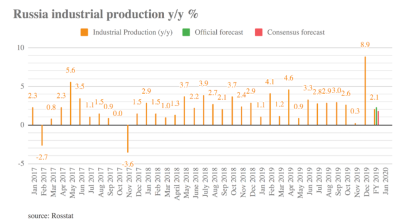 Alexander Isakov, chief economist at VTB Capital broke down the details of production in a note part of, which is reproduced below.

Out of the total +1.8pp of acceleration in annual growth from November, some +2pp can be attributed to manufacturing, which advanced to growth of +3.4% y/y from the prior +0.1% y/y. Mining & quarrying accounted for another +0.1pp, accelerating to +1.8% y/y, whereas electricity & gas provision shaved ­0.5pp from the headline growth number, on our estimates, slowing down to a drop of ­5% y/y in December, from zero growth in November. The latter might reflect that December 2019 was warmer than in 2018.

In manufacturing, metals and electronic & optical equipment combined for roughly +2.1pp out of the +3.1pp acceleration in the headline manufacturing growth, exactly the same sectors that were the main contributors to the downshift in November. In our Industrial Production ­ November: dark matter still matters, of 17 December 2019, we highlighted that these categories were prey to data omissions and, thus, swings in the data cannot be explained and are basically unpredictable.

Food production remains one of the locomotives of growth in manufacturing: in December, food production increased as much as +10.8% y/y (a rate of growth that has not been seen since 2016). In 2019, food output was up +4.9% y/y.

In December, meat production was up +3.2% y/y. However, the annual numbers are a lagging indicator of production growth and might not account for shifts in seasonality. Adjusted for seasonality, the output of meat was down ­0.2% 3mma SA in December, on our estimates, down from +1.6% 3mma SA in September (in September, meat prices started to decelerate in m/m SA terms).

The contraction in the supply of meat in seasonally adjusted terms, together with the most recent news regarding China allowing beef exports from Russia, might put some upward pressure on meat prices (in m/m SA terms) in the near future, in our view.

The pick up in the growth of other mineral products production to as much as +20.5% y/y in December, as well as the output of non­mineral products springing back to +2.8% y/y, might indicate that construction activity also accelerated in December (our estimate for December is +4.4% y/y, the Bloomberg consensus sees +0.4% y/y).