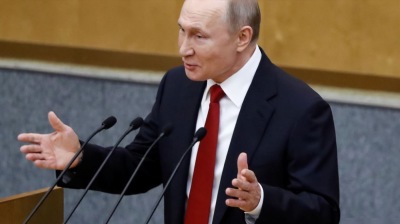 The new law resets Russian President Vladimir Putin's term count to zero and clears the way for him to serve yet another two terms, after which he will be 83 years old
By Ben Aris in Berlin March 10, 2020

Russia’s parliament passed laws on March 10 that would reset Russian President Vladimir Putin's term count to zero and clear the way for him to stay in office until 2038, when he will be 83 years old.

Putin surprised observers by proposing deep changes to the constitution during his State of the Nation address on January 15, which included a suggestion that he would leave office in 2024 as mandated by the current constitution and suggested he would moved to head up the State Council, currently a relatively powerless body for regional governors.

In addition, Putin introduced proposals to limit who can become president of Russia, including barring those that had lived and studied abroad as well as strictly limiting a president to two terms in office in total.

“Putin makes his decisive move - [the] Duma has just voted for an amendment which allows him to serve two more terms after 2024. All the rest was just a smokescreen, it seems,” tweeted well-known commentator and journalist Leonid Ragozin.

“This would be a stabilising factor for our society,” she said.

Putin arrived at the Duma after Tereshkova, one of the most venerated of Russia’s public figures, made her comments, and said he was open to the idea.

“In principle, this option would be possible, but on one condition: if the Constitutional Court formally concluded that such an amendment would not contradict the principles and basic provisions of basic law and the Constitution,” Putin said in a speech to the Duma.

Tereshkova’s proposal was put to a vote shortly afterwards and passed with an overwhelming majority. The constitutional court is seen as under the sway of the Kremlin and commentators say it is unlikely to object to the new law.

The changes to the constitution are to be confirmed by a popular referendum scheduled for April 22.

Speculation has dogged Putin for years that he would change the constitution and make himself president for life as most of his peers in the Commonwealth of Independent States (CIS) have done.

Putin’s proposed move to the State Council, which will also see its powers beefed up in the upcoming changes, was widely seen as a “Nazarbayev gambit”, after Kazakh President Nursultan Nazarbayev formally stepped down last year, but kept hold of the reins of power by appointing himself to a supra-national body. Putin has said himself several times that he does not want to stay on in office after his term expires in 2024.

If Putin does intend to stay in office beyond 2024 then he runs the risk of provoking large-scale protests and social unrest. While Putin’s personal popularity remains at about 68%, according to the most recent independent survey of pollster the Levada Center, Russians have also made it clear in other polls that they are ready for a change at the end of the current two terms in office in 2024. According to Levada, 44% of voters want Putin to quit in 2024, while 45% believe he should stay.

Resetting the presidential term count to zero with the change of constitution opens the way for Putin to server a total of six terms that would make him the longest-serving Russian leader other than Peter the Great, who became tsar at the age of nine.

In his address to the Duma Putin played on the themes of the need for stability, recalling the chaos of the 90s, and raised the spectre of a Russia surrounded by enemies – themes he has played on for several years to bolster his position. In particular, he singled out the coronavirus and the more recent start of the oil crisis, which followed Russia’s decision not to participate in a new oil production cut deal with OPEC.

Some observers have speculated that Putin’s announcement is part of a series of actions that have been carefully planned and orchestrated to deliver on a number of goals.

Russia’s decision to withdraw from the OPEC+ deal was initially seen as an attack on the US shale producers, as by collapsing the oil prices many US producers start losing money when prices fall below $50 a barrel.

Now the decision can be interpreted as a calculated move to cause turmoil, as the subsequent collapse of oil prices was entirely predictable. And the decision to do it in the midst of the coronavirus has only added to the impact of the decision. The heightened uncertainty only plays into Putin’s hands, who in the midst of these escalating and expanding crises appears as a rock of continuity. For most Russians Putin’s biggest achievement was to bring stability to Russia following the chaos of Yeltsin’s premiership.

Moreover, this is not the first time that Putin has been elevated to power in the midst of crisis. He was voted in as president in 2000 from the office of prime minister in the midst of a series of “apartment bombings” where residential housing blocks were blown up in the middle of the night full of residents. The attacks were blamed on Chechen separatists, but many believe that the bombings were planned and orchestrated by the Federal Security Service (FSB) on Putin’s, or his proxies', orders so as to sow panic and facilitate his election as president.

However, Putin has not said specifically that he intends to stand after 2024 for a fifth and sixth term. As political analyst Ben Nobel has pointed out, one of Putin’s problems over the next four years of his current term is to retain his authority and not become a lame duck president; sowing more uncertainty about his long-term intentions keeps him relevant for the elite, who are the more important constituency Putin needs to appeal to in order to maintain his power.

All the talk of Putin extending his presidency into his dotage has to be set against the widely held belief amongst Russia watchers that he is tired of the job and wants to retire. It has been widely reported, and confirmed by bne IntelliNews’ Kremlin sources, that Putin for the last few years has largely withdrawn from the day-to-day running of government and limits his activities to overseeing the large state-ordered infrastructure projects and to dealing with foreign policy issues.

Despite Tereshkova’s amendment the Russian constitution still enshrines at least in part the principles of democracy. In chapters one and two the provisions explicitly state that "man, his rights and freedoms are the supreme value" (Art 2) and that "the bodies of legislative, executive and judicial power shall be independent." (Art 10). However, they also de facto increase the president’s power and undermine these principles.

“Today’s developments damage this project significantly,” said constitutional lawyer William Partlett in a tweet. “Most importantly, they suggest an elite that still only trusts in personal "manual control" by a trusted leader rather than the system of rotation of power that allows the development of well-functioning institutions described in the foundational parts of the constitution.”

As bne IntelliNews described in a cover story in 2007, Putin has adopted a “ZAO Kremlin” model where Putin acts not only as the elected president of Russia, but the informal CEO of Russia Inc., where oligarchs and the elite must approve their plans with Putin in frequent one-on-one meetings or face getting “sacked” in the way that oil tycoon Mikhail Khodorkovsky was fired. Putin has always been primarily concerned with managing Russia’s elite. And that elite demand Putin takes their interests into account before anything else.