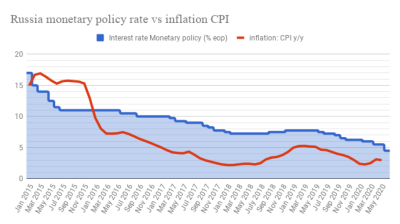 The board of the Central Bank of Russia (CBR) has resolved to cut the key interest rate by 100bp from 5.5% to 4.5% at the policy meeting of June 19. The cut is four-fold larger than the minimum step of 25bp and was largely anticipated by the market, as the CBR has signalled it is ready to accelerate the monetary easing cycle.

As reported by bne IntelliNews, on April 24 the CBR cut the interest rate by a double step of 50bp to 5.5%, announcing a "shift to the soft monetary and credit policy cycle" and allowing for further cuts at subsequent meetings. The Governor of the CBR, Elvira Nabiullina, then guided for a cut of as much as 100bp in June.

bne IntelliNews had already suggested at the onset of the monetary easing cycle that the CBR could flip from its strict tight monetary policy to front-loaded interest rate cuts. The 4.5% key refinancing rate effectively is the cheapest borrowing rate in modern Russian history.

"CBR throws in the towel on their Fortress Rossiya monetary policy stance," Tim Ash of Bluebay Asset Management reacted on June 19, stressing that given the CBR's "past penchant for Uber Orthodoxy, doing a 100bp cut is a massive statement."

The lower rate is aimed at lowering the cost of credit for both the population and businesses, including mortgage loans. Over-credited borrowers would be able to refinance at lower rates, which would release funds for consumption and investment, the analysts surveyed by Reuters believe.

On the fiscal side, the CBR is extending a helping hand to the Finance Ministry, as it would allow borrowing on the OFZ federal bond market to finance the budget deficit without increasing the cost of debt.

Even though the Ministry of Economic Development saw encouraging signs in Russia's early coronavirus (COVID-19) recovery and improved its recession forecast for 2020, the CBR has maintained a conservative guidance of 4-6% GDP decline in 2020.

Previously the analysts surveyed by RBC business portal believed that moderate inflation, a stable ruble and recovering economic activity all provided space for a 100bp interest rate cut. Domestic demand is still expected to take over a year to recover, which would help mitigate inflationary risks.

The latest inflation data suggests that price growth remains in check and well below the CBR's target of 4%, but the CBR now sees the risk that “in 2021 inflation might significantly deviate downwards from the 4% target".

The CBR did not provide a new inflation guidance, but noted the "considerable" downside inflation risks, which could mean it aims at 3.3-3.8% inflation by the end of 2020 instead of 3.8-4.8% previously.

Nordea Bank's Grigory Zhirnov noted that the fact that the CBR is now concerned with disinflationary risks (inflation being below the target of 4%) indicates that the regulator is worried about the magnitude of the drop in demand.

“If the situation develops in line with the baseline forecast, the CBR will consider the necessity of [a] further key rate reduction at its upcoming meetings,” the press release accompanying the rate cut read, clearly guiding for possible rate cuts beyond 4.5% already in 2020.

But Natalia Orlova of Alfa Bank told Reuters that CBR's formulation of a further cut guidance "sounds [as if] the regulator is uncertain [about] the necessity of further cuts at [subsequent] meetings".

The economist reminded about COVID-19 second wave risks, arguing that the CBR realises that reanimating the credit activity in such adverse conditions is challenging, and more inflationary risks could possibly erupt.

Chief economist of BCS Global Markets Vladimir Tikhomirov warns that the CBR is making a strong bet on stable downward inflation trend in the short term. The BCS GM analyst previously argued that certain factors such as oil market volatility and results of the harvest in autumn could still reverse inflation upwards.

Nabiullina previously pledged not to allow negative real currency rates, which would mean that a sudden spike in inflation would leave the regulator with little space for policy action, Tikhomirov argues.

Russian supply woes have driven European gas prices to previously unimaginable levels, but why are electricity prices so high?

Russia is now the only country in Europe where inflation is falling thanks to the determined action by the central bank that has been tightening monetary policy since March last year.

CPI inflation in Moldova hits 33.6% y/y in July
5 hours ago
How do high gas prices push up the cost of power?
13 hours ago
Russian inflation falls to 15.1% in July
14 hours ago
Russia’s current account surplus hits new all-time high of $166bn
18 hours ago
Poll shows every other Russian supports continuing the war against Ukraine
1 day ago