Russia and US to kiss and make up? Blinken and Lavrov meeting in Reykjavik 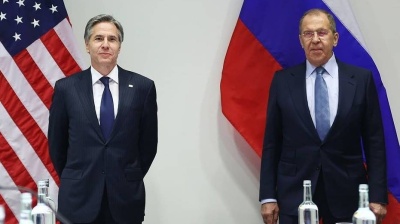 The Biden and Putin administrations meet for the first time face to face with a meeting between Russian Foreign Minister Sergei Lavrov and his US counterpart, Secretary of State Antony Blinken, in Reykjavik where they began the process of sounding each other out. / wiki
By Ben Aris in Berlin May 21, 2021

Russian Foreign Minister Sergei Lavrov and his US counterpart, Secretary of State Antony Blinken, met on the sidelines of the Arctic Council summit in the first face-to-face meeting between the new Biden administration and the Kremlin on May 19 in an attempt to find a more “stable” relationship.

Both sides have been talking tough as they try to set the terms of a relationship for the next four years and redefine rules of the game after the erratic Trump administration.

The Kremlin has been particularly aggressive. After a decade of preparation it appears that Russian President Vladimir Putin feels his fiscal fortress is ready and makes Russia largely impervious to sanctions. At the same time, with Russia’s military modernisation that began in 2012 largely complete the Kremlin also feels it is strong enough to face down US forces both in its own backyard as well as in theatres further afield like Syria and Africa.

Lavrov made the new zero-tolerance for “economically damaging” sanctions imposed on Russia by the West explicitly clear in a new rules of the game speech in February and followed that up with a threat to break off diplomatic relations with the EU if more sanctions were imposed.

The EU has taken the threats seriously and backed off, imposing only symbolic sanctions on Russia for the poisoning and jailing of anti-corruption activist and opposition politician Alexei Navalny.

However, what Washington would do has been the subject of speculation. So far it has mirrored the EU symbolic sanctions over Navalny and pulled its punches, with another round published on April 15 which targeted Russia’s domestic OFZ bonds for the first time, banning US investors from the primary auctions but not secondary market trading that are largely symbolic, as they have no effect on investors in practical terms.

“We could have done more, but we didn't,” Biden said after the details of the sanctions were announced.

Biden has said that Russia will be “made to pay” for its interference in US domestic politics, but at the same time he has signalled that he wants to “stabilise” the relationship and is certainly not keen to escalate, but will do so if he is forced by Kremlin aggression.

Notably on the eve of the Lavrov-Blinken meeting on May 19 a report was “leaked” that the US would not sanction the Swiss-registered but Russian-owned Nord Stream 2 AG operating company, chaired by Putin’s friend and German national Matthias Warnig, that is building the Nord Stream 2 gas pipeline, thus more or less ensuring its completion this summer.

“I have determined that it is in the national interest of the United States to waive the application of sanctions on Nord Stream 2 AG, its CEO Matthias Warnig and Nord Stream 2 AG’s corporate officers,” Blinken said in a statement accompanying the report.

An official at the US State Department confirmed that the company was being excluded from the regular sanctions report, although subsidiaries and various ships remain on the list. The official also suggested that Biden valued Washington’s relationship with Germany more than it felt the necessity to punish Russia.

German Foreign Minister Heiko Maas welcomed the news and pointed out that Germany’s desire to see the pipeline completed was the “one major point of contention” between Berlin and Washington.

However, the decision not to sanction the company ahead of the Lavrov-Blinken meeting will also usefully be taken as a strong positive signal by the Kremlin that the White House is willing to compromise. Apart from the symbolic sanctions related to Navalny and the OFZ bonds, the only other significant interaction between the Kremlin and the White House since Biden took over has been to renew the key START III missile treaty – something else that both sides wanted. Both Biden and Russian President Vladimir Putin have said publically they are interested in co-operating on arms control deals, climate change and a raft of international problems like Syria, Libya, tensions in the Middle East and most recently the outbreak of violence in Gaza.

Summit to talk about

The meeting in Reykjavik went well, with Blinken telling Lavrov the US is seeking a “more stable and predictable relationship with Moscow,” but added that the US would “act firmly in the defence of US interests.”

“There are many areas where our interests intersect and overlap, and we believe that we can work together and indeed build on those interests,” said Blinken. “It is our view that, if the leaders of Russia and the United States can work together co-operatively, our people, the world can be a safer and more secure place,” he added.

Lavrov responded in kind by laying out a shopping list of complaints, but ended his opening remarks saying that Russia is also looking for “strategic stability” in its relationship with the US.

“We seriously diverge in our assessment of the international situation and our approaches towards how we should resolve it,” Lavrov said. “Our position is clear: we are ready to discuss all issues without exception, on the understanding that the discussion will be honest, factual and conducted with mutual respect. The laws of diplomacy recommend mutuality, especially when it comes to a response to any kind of hostile actions. Our task is to make the best of the diplomatic opportunities we have, and we appreciate that you demonstrate such an approach,” he noted. “Not exactly similar views but similar goals,” emphasised Lavrov, without the help of a Russian translator.

As bne IntelliNews has reported, the two rivals are engaged in a delicate diplomatic dance that combines offers of co-operation and sabre rattling. Blinken in particular highlighted the recent build-up of Russian troops on Ukraine’s border and also called for the release of two Americans – Paul Whelan and Trevor Reed – in Russians jails, who have been charged with espionage.

The list of differences is long and the two diplomats are not seeking the reset that former president Barak Obama tried at the start of his first term, but there is a clear message that pragmatic co-operation is possible.

Blinken mentioned Russia’s military operations in the Syrian civil war and added that it’s “no secret that we have our differences,” just after an elbow bump with Lavrov in his opening remarks.

Blinken, according the US account, added some more specifics of issues the two discussed, suggesting “enhanced cooperation,” involving Afghanistan, as well as curbing the nuclear programs of Iran and North Korea. Russia is deeply involved in all three areas.

Lavrov took an almost identical line, saying before the meeting that there were “serious differences” in how the US and Russia view major issues in the world, but added: “our task is to make the best of the diplomatic opportunities that we have.”

“It seems we had constructive talks,” Lavrov said after the meeting with Blinken, according to the Ministry of Foreign Affairs website. He added that there was a need to get beyond the “unhealthy situation, which occurred in relations between Moscow and Washington in the previous years.”

Separately in Moscow on the same day Putin told the local press that he wanted to draw a line under Biden’s “killer” comments and focus on improving relations with the US.

While the two seasoned diplomats had their first opportunity to sound each other out and see where they might co-operate and where they might clash, the big item on the agenda was trying to settle a date and venue for a proposed one-on-one summit between Biden and Putin, which is supposed to happen somewhere in Europe on June 15-16.

No news was forthcoming as to what if any progress had been made in setting the date and place for the meeting. Lavrov declined to comment on a possible Biden-Putin meeting, according to an Interfax report. The Kremlin is reviewing the proposal, but still has not formally accepted the invitation.