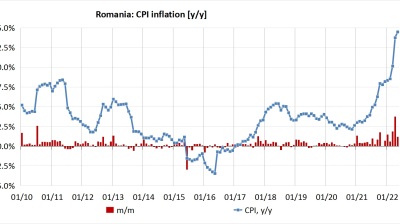 Food prices increased in line with the average, by 14.3% y/y, and prices of the non-food goods (including natural gas, electricity and fuels) advanced faster, by 17.2% y/y. Prices of the services rose by only 7.5% y/y.

In the latest monetary board meeting on May 10, the National Bank of Romania (BNR) increased the monetary policy interest rate by 75bp to 3.75%, a smaller increase than analysts had expected.

A research note from BCR Bank, coordinated by chief economist Ciprian Dascalu, argued that the BNR has coordinated its steps to increase the monetary policy interest rate so that the differential between Romania's key interest rate and that of Poland remains unchanged.

In the current context, “we see the monetary policy interest rate reaching 5.50% at the end of the year and 6.50% for the credit facility, which should remain the relevant operational policy instrument for strict liquidity management. In the medium term, the BNR governor said that he sees the CPI and the key interest rate converging towards 5.0%," said Dascălu.

"We expect more persistent underlying inflationary pressures and estimate that core inflation will reach 11.7% in December 2022, falling to 7.2% until the end of 2023 and remaining over the BNR  target range for the entire period of the next eight quarters. BNR sees the CORE inflation at 10.9% and 4.8% for the end of 2022, respectively the end of 2023,” BCR’s note said.

Russia’s industrial output decline slows to only 0.1% in August
8 hours ago
Putin's popularity remains high, but even after a hit in September it is still at 77%
9 hours ago
Russia on track to have a record-smashing grain harvest
2 days ago
Bosnia posts annual CPI inflation of 16.8% y/y in August
2 days ago
IMF sees Romania’s economy growing by 4.8% in 2022, analysts are even more bullish
3 days ago