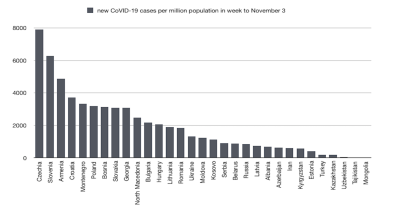 The growing number of coronavirus (COVID-19) cases is putting healthcare systems in Central and Southeast Europe under intense pressure. As cases continue to rise, there are reports of field hospitals being set up and retired medical personnel and students being brought in to make up staff shortfalls.

Europe has again become the global hotspot for the spread of the virus, accounting for 1.7mn of the 3.4mn new cases reported worldwide in the week ending November 3, according to the latest weekly epidemiological report from the World Health Organisation (WHO). That is a 24% week-on-week increase in cases in the continent.

In the emerging Europe region, Czechia continues to report the highest number of new cases relative to the size of its population: 84,305 in the 7-day period, or 7,887 per million of the population. The figure is slightly up on the 81,970 reported in the previous week, when the government announced a partial lockdown and overnight curfew.

Neighbouring Slovakia racked up 16,863 new cases during the week, or 2,488 per million, but Bratislava is hoping its mass testing programme will stem the spread of the virus – and potentially inspire other countries to follow its lead.

All of the Visegrad 4 countries are struggling with a vicious second wave of the pandemic. Poland announced 120,785 new cases in the week to November 3, and new cases soared to a record 24,692 in the next 24 hours, moving the authorities in Warsaw to announce the closure of the remainder of schools, as well as most retail and cultural facilities.

The government said that the restrictions were “necessary” or the number of cases and deaths would spiral out of control, breaking Poland’s already very strained healthcare system. Existing restrictions were flouted at the mass pro-choice protests taking place for the last two weeks provoked by the ruling of the government-controlled Constitutional Tribunal, which further restricted Polish women’s right to have an abortion.

Hungary reintroduced a state of emergency for 90 days as of midnight on November 3. The rate of daily infections in Hungary has been one of the fastest among EU countries since September, though the government has been – until now – slow to respond by tightening restrictions.

Even in the Baltic states, which until recently had managed to keep the virus under control, new restrictions are being announced. The worst-affected Baltic country is Lithuania, which declared a three-week nationwide lockdown on November 4.

In Southeast Europe, the virus is spreading most rapidly in Slovenia, which reported 12,030 new cases in the last week, or 6,267 per million. Slovenia already has a partial lockdown in place and the government has unveiled new measures to support coronacrisis-struck SMEs.

The situation is only slightly better in Croatia and Montenegro, which reported 3,718 and 3,328 cases per million respectively during the week. Montenegro in particular may be heading for a new surge in cases, as thousands of people largely ignored social distancing rules at mass events to mourn Metropolitan Amfilohije, the head of the Serbian Orthodox Church in Montenegro. Although Amfilohije passed away after being infected with coronavirus, the casket was open and mourners were allowed to kiss his body.

Nemanja Radojevic, deputy head of the Clinical Centre of Montenegro (CCM), told public broadcaster RTCG that the tiny country could be heading for a “catastrophic” situation and urged the authorities to start opening field hospitals.

Tighter restrictions have also been announced in Kosovo, while in Bulgaria the informal organisers of the mass protests that have taken place daily since July called for a halt so as not to risk spreading the virus at demonstrations and putting more pressure on the already overstretched health service. Hoteliers in Bulgaria have offered to accommodate coronavirus patients as hospitals are already approaching capacity.

Further east, Armenia remains another hotspot for coronavirus, with 14,417 new cases during the week, as does neighbouring Georgia with 12,296.

Ukraine's retail sector turnover up 22.7% in May y/y
15 hours ago
Russian industrial production for May up 11.8% y/y
20 hours ago
Growth of Romania's stock of loans reaches double digits at end-May
1 day ago
Russian banks extend bull run by posting $3bn in profits for May
1 day ago
Ukraine’s revises down its GDP growth estimate in 1Q21 to -2.2% contraction
1 day ago