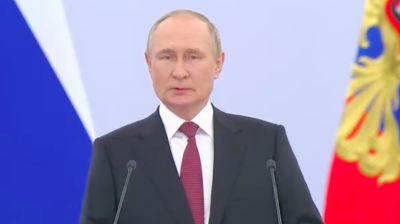 Russia’s President Vladimir Putin has annexed the largest piece of territory in Europe since those taken by Nazi Germany’s leader Adolf Hitler. In a televised address on September 30, Putin proclaimed the Ukrainian regions of Donetsk, Luhansk, Kherson and Zaporizhzhya to be part of Russia.

The annexation had been largely expected after Putin responded to the successful Ukrainian counter-offensive by spearheading sham referenda in the four regions, as well as escalating the war in Ukraine with nuclear threats and initiating a “partial” mobilisation of Russian conscripts.

The formal signing in the Kremlin will be accompanied by a festive ceremony on Red Square, while the Ukrainian army is continuing its advances in Russian-occupied territories.

During the address, Putin did not directly repeat his previous nuclear threats, but pledged to “defend our land with all our forces and means”. “We will do everything we can to ensure the safety of our people. This is the great liberation mission of our people,” he said.

The speech by Putin largely recycled the usual recent mixture of ideological chauvinism, scattered references to "historic Russia" as claims of legitimacy for the Ukraininan territory, fear mongering and calls for national unity against a decadent, corrupt and even satanist “collective West” that has been seeking to colonise, destabilise and destroy Russia since the fall of the Soviet Union.

"This is a battlefield for a greater historical Russia. For future generations. We must protect our children and grandchildren from monstrous experiments. So that it does not occur to anyone that our language and culture can be erased from history," he said.

Only two statements seemingly had actual implications. First, Putin directly blamed the most recent explosions of the Nord Stream pipelines on "the Anglo-Saxons".

"The Anglo-Saxons have had enough of sanctions, they have turned to sabotage – unbelievable but true – by bombing the international gas pipelines of Nord Stream, which run along the bottom of the Baltic Sea. They have in fact started to destroy the pan-European energy infrastructure," he said. "It is obvious to everyone who benefits from this. The one who benefits from it has done so," Putin claimed.

Second, he seemed to draw his red line in the war with Ukraine at the four annexed regions, calling on the Ukrainian side to “come back to the negotiating table”, while stressing that the “choice of people” in Donetsk, Luhansk, Zaporizhzhya and Kherson is beyond questioning.

The annexations will effectively allow Putin to continue the escalation and claim that Western-backed Ukrainian efforts to liberate the Russian-occupied territories are in fact an attack on Russian sovereign territory (although Crimea, annexed back in 2014, and the Russian region of Belgorod have already been targeted).

This could determine the scope of Putin’s goals in the war. The Kremlin press officer Dmitry Peskov already told the press that the entire territory within the borders of the Donetsk Region of 2014 "is to be liberated”.

Whatever the decision, the annexation means prolonged war as Russia seems to be determined to throw hundreds of thousands of untrained and poorly equipped conscripts on the overstretched front line to minimise Ukrainian advances until winter. The annexation decision will effectively bury any prospects of negotiations with Russia, as pledged by the Ukrainian officials previously.

Economically, Putin is taking a course of isolation, as Western sanctions will be tightened and become a long-term reality, while none of Russia’s remaining allies (besides Belarus) are expected to recognise the annexation.

However, the escalation of the war also means that Putin is escalating the challenges at home. While the government has been putting up a resilient image of Russia adapting to sanctions, and has constantly improved the GDP outlook, that growth has largely been fuelled by the commodity sector, which is vulnerable to more sanctions.

The war is driving the finance ministry into a deep fiscal squeeze and the Kremlin’s tendency to appease political challenges by stepping up social spending is likely to only worsen the fiscal position, even more so with four large newcoming regions weighing on the federal budget.

How domestic demand and the labour market will react to the mobilisation is as yet impossible to predict, much like for how long Putin will be able to sell the war in Ukraine to the population and businesses, which will now start to bear substantial losses.

The controversial referenda held by Russia in four Ukrainian regions were widely condemned last weekend, and the EU has prepared an eighth package of sanctions on Russia partly in response to the referenda. EU leaders are next due to meet in Prague on October 6-7, where they will discuss the measures.

Speaking on September 29, US President Joe Biden reiterated that Washington will never recognise Russian claims on Ukrainian territory, and dismissed the referenda as an "absolute sham”.

“The United States ... will never, never, never recognise Russia's claims on Ukraine sovereign territory," Biden said during a visit to the Pacific region.

Meanwhile, US diplomats are reported to have appealed to China to put pressure Russia not to use its nuclear weapons amid growing fears that Moscow could make a nuclear strike on Ukraine.