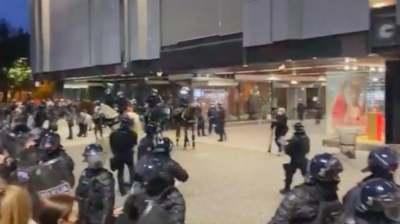 About five hundred people staged a protest in Ljubljana's centre against the second coronavirus (COVID-19) lockdown even though the new restrictive measures ban gatherings of more than six people in public.

The protest was organised by Anonymous Slovenia. The police used a water cannon for the first time since 2012 to disperse the protestors. Ten have been arrested, STA reported citing police sources.

The clashes broke out in front of Parliament House, as the police pushed the protesters from Republic Square, dispersing them along several streets in the city centre.

Some buildings were damaged during the protest as demonstrators throw paving stones and pyrotechnic devices.

Several police officers were mildly injured, with most of the injuries caused by paving stones, head of the Ljubljana Police department Stanislav Vrecar was cited as saying.

Two civilians were reportedly seriously injured and taken to hospital.

Conservative Prime Minister Janez Jansa supported the police officers in a tweet saying that peaceful protests when there is no epidemic are a constitutional right, but riots and physical violence against the police are criminal acts.

Interior Minister Ales Hojs also congratulated the police for putting the violent protests under control but criticised the media, claiming they were also responsible.

"You've supported and fed them for months... and now here you have wounded police officers," minister was cited as saying by Zurnal24.si.

"The protesters were well instructed on how to proceed. When the police emptied the space in Republic Square, they fled in groups of 10, 20 people. The police had a hard time following them and the arrests were difficult," Hojs said.

The Slovenian authorities imposed strict measures on October 23 to prevent the spread of coronavirus  after the number of new infections in the country grew rapidly.

On November 5 the government extended restrictions in the field of education and decided that teaching at all primary and secondary schools will be carried out remotely next week.

Kindergartens will continue to provide only emergency childcare for parents who perform critical jobs.