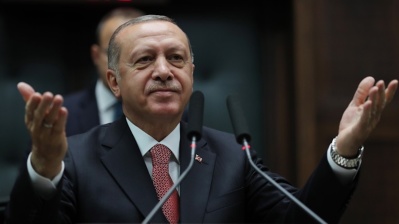 Turkey is to launch a fresh investment and employment mobilisation campaign from the start of December, Turkish President and Justice and Development Party (AKP) leader Recep Tayyip Erdogan said on November 27 during his regular weekly address to the party’s parliamentary group meeting, news agencies reported.

Turkey was erasing the negative effects of the economic attacks from abroad that it suffered in the summer, Erdogan also said, according to a press release on the Turkish presidency’s official website. Government officials still reject analyses that conclude Turkey’s currency crisis, credit crunch and descent into what could be a very rough recession were essentially caused by the country’s economic fundamentals and the Erdogan administration’s inappropriate economic stewardship. Markets are concerned campaign pressures could cause the executive presidency to prematurely ease up on fiscal tightening being used to help fire-fight Turkey's economic turmoil.

Populist Erdogan added in the release: “We will not allow the election atmosphere to overshadow this positive course. We see that some circles are still taking a hesitant approach, following a ‘wait-and-see’ policy with regard to their investments and expenditures. However, this is not a time to wait. On the contrary, it is a time to seize the opportunities.”

Opposition parties are again set to enjoy some clear pre-election popularity, but it is hard to talk about a level playing field for any election in Turkey for long.

According to a presidential decree published on November 27 in the Official Gazette, the share of unemployment fund revenues to be used in support of labour force and employment activities has been hiked to 50% for 2019 and 2020 from the previous 30%.

A total of TRY734mn has, meanwhile, been allocated for 2,545 small and medium sized enterprises (SMEs) to create 6,055 new employment openings, Industry Minister Mustafa Varank said in another November 27 announcement.

The general manager of national flag carrier Turkish Airlines (THY), Bilal Eksi, told state-run news service Anadolu on November 26 that the company would recruit 1,000 pilots and 1,600 cabin crew members next year in line with its expansion plans.

The general police directorate is set to hire 10,000 patrol wardens, the interior ministry will hire 36 personnel, including one district governor, and the directorate of religious affairs will hire 8,498 new personnel, according to presidential decrees lately published in the Official Gazette.

Non-operational state-owned lender Emlak Bank will return to operations as an Islamic lender in 2019 and it has already started with efforts to improve work in the construction and housing sectors, Urbanisation Minister Murat Kurum confirmed on November 21 at a parliamentary budget commission.

Asset-backed securities
The Turkish Development Bank (TKB) has received approval from the Capital Markets Board (SPK) to sell up to TRY3.25bn worth of asset-backed securities to qualified investors without holding public offerings, according to the SPK’s latest regular weekly bulletin published on November 23. TKB will issue the papers via its recently established wealth financing fund.

The government sharply cut its domestic borrowing this month in a move to relax recently tightened liquidity conditions while it is also being made clear via the that the government is encouraging local lenders to “voluntarily” cut lending rates.

Capital Economics said on November 26 in a research note that “evidence is mounting that Turkey’s economy is entering a deep recession in the aftermath of this summer’s lira crisis—both retail sales and industrial production fell in September. The one crumb of comfort is that Turkey seems to be taking advantage of the boost to its competitiveness from a weaker currency”.

It added: “The Economic Confidence Index is consistent with GDP contracting by more than 10% y/y. Meanwhile, banks have so far avoided an outright crisis, but nonperforming loans have picked up and this is leading to a severe credit crunch.”