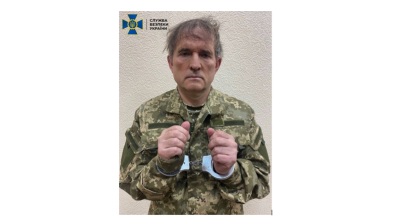 Pro-Russian MP Viktor Medvedchuk, who is currently being detained by Ukraine’s State Security Service (SBU), has asked to be exchanged for Ukrainian soldiers captured in Mariupol, Interfax Ukraine reported on April 18.

Medvedchuk, the head of the political council of the Opposition Platform – For Life Party, was filmed addressing the leaders of Russia and Ukraine after being arrested last week on charges of treason due to his close relationship with the Russian president.

"I, Viktor Volodymyrovych Medvedchuk, want to appeal to Russian President Vladimir Putin and Ukrainian President Volodymyr Zelensky with a request that the Ukrainian side exchanges me for the defenders of Mariupol and [its] residents who are there and do not have the possibility of a safe exit through humanitarian corridors," Medvedchuk said in the video statement released by the SBU on April 18.

On the same day, Russian state media released footage of two captured British soldiers who had fought for the Ukrainian Armed Forces in the besieged city of Mariupol, Aiden Aslin and Shaun Pinner. Both fighters asked British Prime Minister Boris Johnson for them to be exchanged for Medvedchuk, although it is not clear if they spoke freely or under duress.

“If Boris Johnson really does care the way he says he does about UK citizens, then he would help pressure Mr. Zelenskiy and do the right thing and return Mr. Medvedchuk,” Aslin said.

“I understand that Mr. Medvedchuk has been detained and we look to exchange myself and Aiden Aslin for Mr. Medvedchuk,” Pinner was recorded as saying.

Pinner’s sister confirmed with the Daily Mail that a prisoner exchange is being discussed but “not necessarily with Viktor Medvedchuk”.

Before his detainment on April 12, Medvedchuk had been on the run for 48 days after escaping house arrest.

Zelenskiy's government had been ratcheting up the pressure on Medvedchuk for more than a year and accused him of leading a fifth column from the top of Ukrainian politics and acting as a proxy for Russia’s interests.

In February last year, the government imposed sanctions on Medvedchuk for “financing terrorism” and closed down three leading TV stations associated with him and his business partner, Taras Kozak.

The treason charges are controversial, as Medvedchuk is democratically elected and is the leader of the opposition in the Rada as he heads the head of the Political Council of the Opposition Platform, For Life Party, the largest fraction after the ruling Servant of the People (SOTP). Some pundits have speculated that part of Zelenskiy's motivation has been to take out his political rival.

After re-arresting Medvedchuk, Zelenskiy said that he would be offered to Russia in a prisoner swap to “bring our girls and boys home, who have been captured [by the Russian forces].”