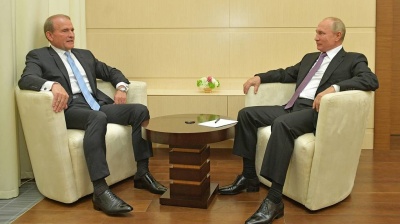 The National Security and Defence Council of Ukraine (NSDC) has imposed sanctions against the Ukrainian MP and leader of the pro-Russian political party “Opposition Platform for Life”, Viktor Medvedchuk.

Medvedchuk has been an eminence gris in Ukrainian politics for decades and is a former head of the presidential administration under Ukraine’s second president, Leonid Kuchma. He is also a personal friend of Russian President Vladimir Putin, who is godfather to his daughter. And he reportedly has significant business interests in Russia.

He has now been subjected to sanctions as part of an attack on the pro-Russian opposition that has seen its popularity rise in recent polls as that of Ukrainian President Volodymyr Zelenskiy sinks, although the comedian turned politician remains the most popular politician in the country.

In an effort to shore up his ratings and to hobble his political rivals, the government has recently launched an attack on media assets associated with Medvedchuk by closing down three leading TV stations via sanctions.

Ukraine’s pro-Russian parties launched an impeachment process against Zelenskiy on February 3, the day after the president closed down TV stations associated with the party, which is unlikely to go anywhere, as the opposition parties do not command enough votes in the Rada to put the motion through.

Under Ukrainian law Ukrainian citizens can only be sanctioned if they commit an act of terrorism. However, no such act has been described, nor any terror charges brought against Medvedchuk. Secretary of the National Security Council Oleksiy Danilov said at a briefing that the restrictions are imposed for three years as part of the case on financing of terrorism.

The move was welcomed by Ukraine’s Western supporters, who have long been unhappy with Medvedchuk’s position at the summit of Ukraine’s domestic politics. The US embassy in Ukraine tweeted that it “supported” the decision to sanction Medvedchuk and pointed out that he was already under US sanctions.

Medvedchuk's wife Oksana Marchenko was also put on the sanctions list; she is also the de jura owner of many of her husband’s businesses.

The new sanctions list additionally includes another Ukrainian citizen, five Russians and 19 companies. The decision of the National Security Council must be approved by the President of Ukraine.

Russia’s reaction to sanctions imposed on its ally in Kyiv was swift. Former Prime Minister, President and currently deputy chairman of the Russian Security Council Dmitry Medvedev called the imposition of sanctions against Medvedchuk a manifestation of the "political inquisition."

"The easiest way to divert attention from their endless failures is to persecute the opposition and subject it to repression. In addition, Viktor Medvedchuk is one of the few Ukrainian politicians who advocates the restoration of relations between Moscow and Kyiv. Such methods of unfair struggle are unlikely to stop the collapse in Zelenskiy’s approval ratings," Medvedev said as cited by the Ukrainian press.

Danilov said that property controlled by Medvedchuk and the others listed, who included five Russian citizens, would be seized by the state.

Ivan Bakanov, head of Ukraine’s SBU state security service, said the sanctions were imposed based on intelligence that the individuals and companies were involved in smuggling coal from eastern regions controlled by Russian-backed separatists. The ongoing investigation would “confirm financing of terrorism”, he said, as cited by the Financial Times.

The sanctions against Medvedchuk will only deepen a political crisis that has been gathering momentum since last autumn when the Constitutional Court struck down a raft of anti-corruption mandated by the International Monetary Fund (IMF). Zelenskiy attempted to fire the judges responsible, for which he has no power to do so, and threatened to plunge Ukraine into a constitutional crisis. The judges' decision, five of which are under investigation for corruption themselves, was widely seen as handed down at the behest of the oligarchs.

That particular crisis has yet to be resolved. The attack on Medvedchuk’s media holding is seen by some as part of the same growing tension between the president and the oligarchs. Medvedchuk is also part-owner of the media assets belonging to oligarch Ihor Kolomoisky, who is credited with putting Zelenskiy into office in the 2019 presidential election.

Zelenskiy’s decision to take Medvedchuk’s three TV channels off Ukrainian airwaves for allegedly spreading pro-Russia “disinformation” was sharply criticised by the Kremlin, but the Western response has been muted, despite the questionable legality of the sanctions.

Assets to be seized from Medvedchuk include an oil pipeline in western Ukraine and aircraft controlled by companies affiliated with him and his associates, Danilov said.

According to Danilov, the sanctions come amid what he described as a flare-up in the fighting in the east of Ukraine, which has so far this year claimed the lives of 13 Ukrainian soldiers.