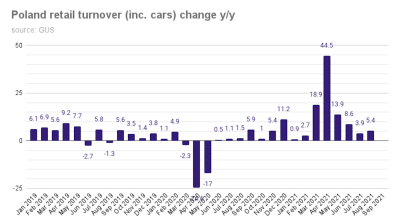 Polish retail sales grew 5.4% y/y in constant prices in August, the growth rate picking up from an expansion of 3.9% y/y the preceding month, statistics office GUS said on September 21.

The August increase owes primarily to the calendar and last year’s low base effects but the market consensus was for a faster expansion and the reading is a slight disappointment, Bank Millennium notes.

“Growth in real consumer spending is curbed by inflation … as well as consumptions’ changing structure after pandemic restrictions were eased and the services sector was reactivated,” Bank Millennium wrote. Bottlenecks in the supply chain also played a role.

Six out of eight main retail segments enjoyed y/y turnover gains at constant prices in August, GUS showed in the breakdown of the data.

Sales of textiles, clothing, and shoes jumped 28.6% y/y in the eighth month. Sales of pharmaceuticals added 7.5% on the year, while sales of books and press expanded 7.9% y/y. Car sales increased 5.7% y/y.

Overall, notes Capital Economics, the somewhat subdued performance of the retail sector in August is not concerning. “We wouldn’t be too alarmed as the continued reopening of the economy has probably prompted households to shift some of their consumption away from goods and towards services,” the London-based analysts wrote.

“In the months to come we will observe further stabilisation of growth figures as the base effect will become less supportive,” Erste noted.

“Based on available real economy data for the third quarter, GDP growth could land around 4.2% y/y, slightly below our current estimate. We see some risks to the downside to our current FY21 GDP growth forecast,” the Austrian bank added.

Russia’s industrial output decline slows to only 0.1% in August
12 hours ago
Putin's popularity remains high, but even after a hit in September it is still at 77%
13 hours ago
Russia on track to have a record-smashing grain harvest
2 days ago
Bosnia posts annual CPI inflation of 16.8% y/y in August
2 days ago
IMF sees Romania’s economy growing by 4.8% in 2022, analysts are even more bullish
3 days ago