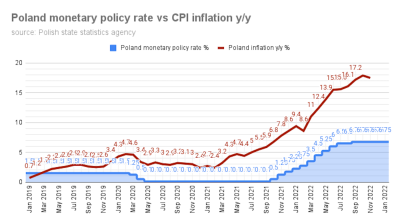 The National Bank of Poland (NBP) left its reference interest rate unchanged at 6.75% for a fourth consecutive meeting on January 4 (chart).

The decision is in line with market consensus. The NBP’s shifted its focus from containing inflation to preserving conditions for economic growth – feeble as it is expected to be in 2023 – after aggressive tightening that took place between October 2021 and September last year set the context for price growth to begin easing gradually.

Poland’s CPI growth remained at a multi-decadal high of 17.5% y/y in November but still came in at 0.4pp lower than in the preceding month. Other indicators, such as the PPI, also point to inflation weakening, albeit very incrementally.

“The expected weakening of the external economic conditions, together with monetary policy tightening by major central banks, will curb global inflation and commodity prices,” the NBP said in a statement.

“The weakening of the global economic conditions will also hamper GDP growth in Poland. Under such circumstances, the hitherto significant monetary policy tightening by NBP will support a decline in inflation in Poland towards the NBP inflation target,” the central bank added.

With interest rates unchanged since September now, the NBP – via its controversially vocal chief Adam Glapinski – continues to insist that the tightening cycle has been merely paused, not ended.

But analysts say that borderline recession economy expected in 2023 effectively means that there is no room for any more hikes and that the central bank’s next move will be an actual rate cut.

“With inflation likely to reach a peak in the next couple of months and growth set to weaken, we doubt that further rate hikes will actually be delivered,” Nicholas Farr, Emerging Europe economist at Capital Economics, said in a comment.

“We expect the next move by the NBP will be an interest rate cut, although that is only likely to arrive towards the end of 2023,” Farr also said.

VISEGRAD BLOG: When Eastern European states speak out they are now listened to
bneGREEN: Renewable energy was a hot topic in Davos but for Europe, much work remains
Slowdown squeezes Poland’s industrial production growth to 1% y/y in December