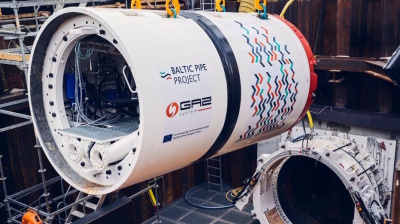 Poland has invested in alternative routes such as the Baltic Pipe to take the place of Russia's Yamal pipeline. / bne IntelliNews
By Wojciech Kosc in Warsaw November 15, 2022

Poland has put Europol Gaz, the manager of the Polish section of the Yamal pipeline, under “temporary compulsory administration”, the Ministry of Development and Technology said on November 14.

Europol Gaz owns and manages 684km of Yamal’s Polish section. The company is 48% owned by Gazprom, which Poland put on its sanction list after Russia’s attack on Ukraine.

“We are doing everything possible to counteract the effects of Russian aggression, but also to eliminate Russian capital and influence,” Technology and Development Minister Waldemar Buda said in a statement.

The minister added that since expropriation was not possible under the Polish constitution, the government decided on a temporary administration. The move came upon the request of Poland's counterintelligence agency ABW, local media reported.

The decision is “necessary for the proper functioning of Europol Gaz” and will ensure that there is “decision-making paralysis in the company” while “security of critical infrastructure intended for gas transmission” remains intact, Buda also said.

Poland’s state-controlled oil and gas company PGNiG is another major stakeholder in Europol Gaz, owning a 48% stake plus 4% via Gas-Trading, a company from PGNiG’s capital group.

Gazprom is not the first Russian company to have its assets put under administration in Poland. The Polish business of Russian company Novatek Green Energy, which supplies gas to several municipalities in northern Poland, has operated under the same regime since October.

There appeared to have been no reaction from Gazprom to the Polish government’s takeover of the company’s assets.

Poland intervening to establish control over Russia-linked energy assets is symptomatic of the role Russia played in the Polish and other EU energy sectors and how that role same to be seen as a major security risk after the Kremlin decided to attack Ukraine in February.

“In order to secure the gas supply in Germany, the federal government is transferring the ailing gas company Securing Energy for Europe GmbH (SEFE) into federal ownership,” Germany’s economy and climate ministry said in a statement.

The move follows putting Sefe under trusteeship of the Federal Network Agency (gas market regulator) in April after Gazprom attempted a “non-transparent sale of Gazprom Germania to another Russian company and their attempt to liquidate it", the ministry also said.

In September, Germany also took over control of two Rosneft subsidiaries – Rosneft Deutschland and RN Refining and Marketing – saying that the step was necessary to shore up the country’s energy security.

Poland says it will have enough gas during the winter despite Russia cutting supplies altogether after Warsaw refused to pay for them in rubles in April.

Poland also offered Germany crude oil supplies to the Schwedt refinery as soon as Berlin muscled out Russians from the installation.