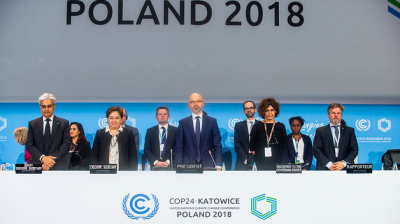 Crucial negotiations on how to impede growth of global temperatures stumbled across the finish line in Katowice, Poland, on December 15, as nearly 200 governments agreed on a common set of rules to guide their climate policies.

Talks appeared on the edge of being derailed by Brazil over future carbon trading market rules, but the Polish presidency of the COP ultimately brokered the final agreement. Despite all of its shortcomings, the agreed “Katowice Rulebook” is a step forward in tackling climate change and fairly solid premises to build upon in the coming years.

The UN-organised Katowice summit, known as the Conference of the Parties (COP), agreed in the first place on the way in which countries will table their climate action plans.

“[The Katowice Rulebook] sets out how countries will provide information about their domestic climate actions. This information includes mitigation and adaptation measures as well as details of financial support for climate action in developing countries,” the UN’s Framework Convention on Climate Change (UNFCCC), the summit’s organiser, said in a summary of the talks’ results.

Importantly, the rules apply across the developed and developing economies, which need to follow common rules of transparency so that they can be verified. That will also allow countries to hold each other to account on climate action.

Public access to national climate plans is also hoped to drive their scrutiny and push governments to increase their ambitions. A lack of direct reference that ambition in climate action should be raised is a major shortcoming of the talks, some observers say.

The issue of doing more to keep global warming at bay will return next year in September, at the UN’s special climate summit in New York. And then in December during the next COP in Santiago, Chile.

The Katowice COP also made progress in the ever delicate issue of climate finance. Countries pledged to continue contributions to multilateral funds such as the Green Climate Fund, and also progressed towards the goal of mobilising $100bn per year from 2020 for climate action in developing economies.

In a story similar to many previous UN-organised climate summits, the gathering in the heart of the Polish coal country went 24 hours overtime, as diplomats haggled over details.

They had spent the previous two weeks in Katowice writing rules of how to implement the previous global climate change deal, the 2015 Paris Agreement. It was a political accord – general without operational details – that set a goal of keeping global warming at 1.5 degrees Celsius by 2100, relative to the pre-industrial era.

The target limit of temperature rise is rooted in climate change science. Just before the Katowice summit kicked off, an October report by the UN’s key climate change scientific body, the Intergovernmental Panel on Climate Change (IPCC), sounded an alarm.

The IPCC said that even allowing the global temperatures to grow by 2 degrees Celsius by the end of this century – a seemingly minute difference of 0.5 degrees versus the target – would have disastrous consequences.

Extreme weather, falling crops, and a faster rise of ocean levels, are just some effects with potential to destabilise the current order, shaky as it as already, if Earth becomes too warm.

The IPCC report proved to be one of the major sticking points during COP in Katowice. The US, Saudi Arabia, Russia, and Kuwait all blocked “welcoming” the report, which in diplospeak would mean embracing its findings.

Eventually, the summit agreed to a watered down version of referencing the IPCC’s work, “welcoming timely completion” of the report, which critics say ignores its content.

In the dying hours of the talks, Brazil risked derailing the deal by opposing discussion on details of carbon markets. Deferring the discussion to 2019 temporarily solved the deadlock.

Given the current crisis of international cooperation as seen in the rule of Donald Trump in the US or by Brexit, the final outcome of the Katowice conference is a step forward for multilateralism that is crucial in addressing climate change.

“Despite all the headwinds, the Paris Agreement has stayed course at COP24, demonstrating the kind of resilience it has been designed for. The decisions made here on the Paris rulebook give us a solid foundation to keep building trust in multilateralism and accelerate the transition all across the world,” Laurence Tubiana, CEO of the European Climate Foundation and key architect of the Paris Agreement, said in reaction.

For Poland itself, the meeting in Katowice further rooted the discussion about the need for an energy transformation in mainstream discourse.

“Five years ago, there was no global climate policy framework, Polish policymakers did not believe in European emission reduction goals, renewables were still seen as uncompetitive, and domestic coal was considered a safe option,” said Aleksander Sniegocki, head of the climate and energy programme at Polish think-tank Wise Europa.

“Today, increasing coal imports resulting from low competitiveness of Polish mines, widespread concerns about air pollution, rising cost of conventional power plants and record low prices of renewables make it clear that the country needs to move away from coal,” he added.