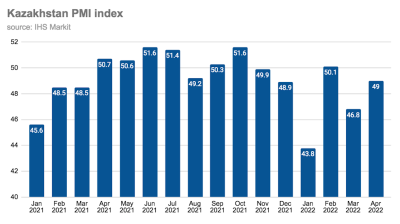 The Kazakh manufacturing sector remained in contraction territory in April as impacts of Russia’s invasion of Ukraine hit Kazakhstan’s economy, according to the latest purchasing managers' index (PMI) survey data from Tengri Partners and IHS Markit.

The index posted 49.0 in April, after posting 46.8 in March. The headline Kazakhstan Manufacturing PMI is a composite single-figure measure of manufacturing performance. Any figure below 50.0 represents a deterioration.

New orders decreased for the fifth successive month in April due to price hikes and a lack of customers. The rate of decline eased significantly from the previous month, however, as some firms were reportedly able to secure new business.
Manufacturing production also declined, marking the second month running in which this has been the case. Unstable raw material prices, supply shortages and sanctions imposed on Russian firms were all mentioned in the survey as having negatively impacted output. The modest reduction was broadly similar to one seen in the previous month.

"One key positive from the latest PMI data was a stabilisation of employment following a sustained period of decline. A number of firms reported having been able to fill vacant positions, hopefully a sign that the recent trend of workers resigning to look for opportunities elsewhere is coming to an end,” he said.

"That said, firms will need greater geopolitical stability to help improve domestic economic conditions and support returns to growth of output, sales and employment in order to bring the current downturn to an end," he added.

Russian economy stable in May, but demand and income contraction deep
18 hours ago
CEE Economic Sentiment Indicators fall on polycrisis woes
21 hours ago
Europe’s gas storage on track to meet 80% full by start of heating season
1 day ago
Kosovo’s population dropped to 1.77mn in 2021 as emigration outweighed natural increase
2 days ago
North Macedonia’s PPI jumps 21.7% y/y in May
2 days ago