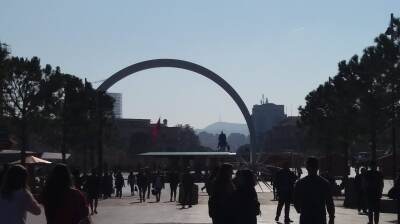 Albanians are overwhelmingly pessimistic about the way their country is going, and unenthusiastic about any of the leading domestic politicians, the latest Euronews Albania Barometer compiled in collaboration with MRB Data Centrum showed.

When it came to the economic situation, a slightly higher 69.3% said the situation was negative, 23.9% see both good and bad economic opportunities, and just 6.2% think the economy is currently doing well.

While the economy started the year with strong growth of 6% in Q1, growth slowed after Russia’s invasion of Ukraine, and is currently expected to come in at a considerably smaller 3.2% for the full year, according to the World Bank.

Of the country’s main politicians none had an approval rating of over 50%.

Prime Minister Edi Rama, whose Socialists were elected for a third consecutive term in 2021, came the closest, with 40.6% saying they had a positive opinion of him – but that left 56% with a negative opinion.

Other politicians performed even worse. Albania’s main opposition leader, Democratic Party head Sali Berisha, won the approval of just 26.2% of respondents, with 71.5% having a negative opinion of him.

Only 6.7% had a positive opinion of former president Ilir Meta, leader of the Freedom Party, compared with 90.7% who had a negative opinion.