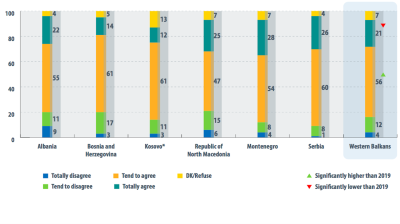 Responses to the question: Do you agree that regional co-operation can contribute to better political, economic or security situation of your economy? / RCC/Balkan Barometer
By bne IntelliNews June 28, 2021

The latest annual Balkan Barometer, a comprehensive survey of opinion in the Western Balkans states published by the Regional Co-operation Council, shows an overwhelming majority are in favour of regional co-operation.

77% of respondents support the role of regional co-operation in improving the political, economic and security situation in their home economies, according to the report published on June 24.

“As we anticipated last year, a neighbour in need is a neighbour indeed,” commented secretary general of the Regional Co-operation Council Majlinda Bregu on the launch of the report.

“[An] underlying sentiment of solidarity pervades the Western Balkans, with close to two-thirds focusing on what brings the region together rather than what drives it apart,” said the report.

However, it adds that the proportion of respondents associating positive feelings with the region has contracted to 36% since 2019, while one third have an instinctively negative reaction. 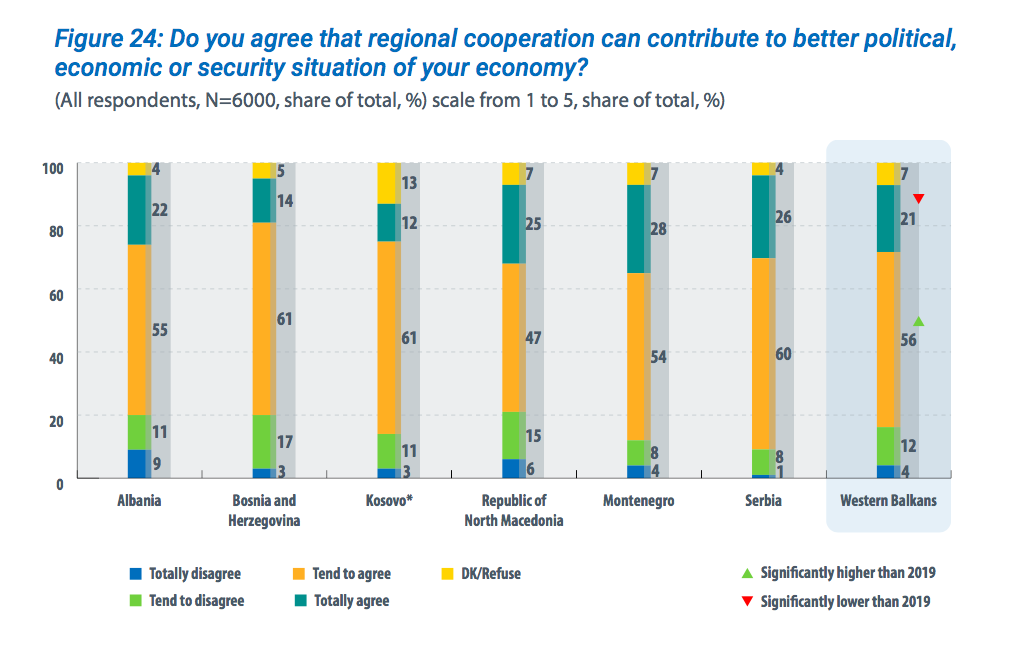 “Bosnia and Herzegovina is the region’s most forceful cheerleader, with 67% eager to highlight ties that bind the Western Balkans,” it added. Meanwhile, Serbia went from being the region’s leading critic of regional developments in 2019 to an enthusiast about the region’s current relations.

Citizens of the six countries are also keen to join the EU, valuing integration with the bloc over relations with China, Russia or Turkey. 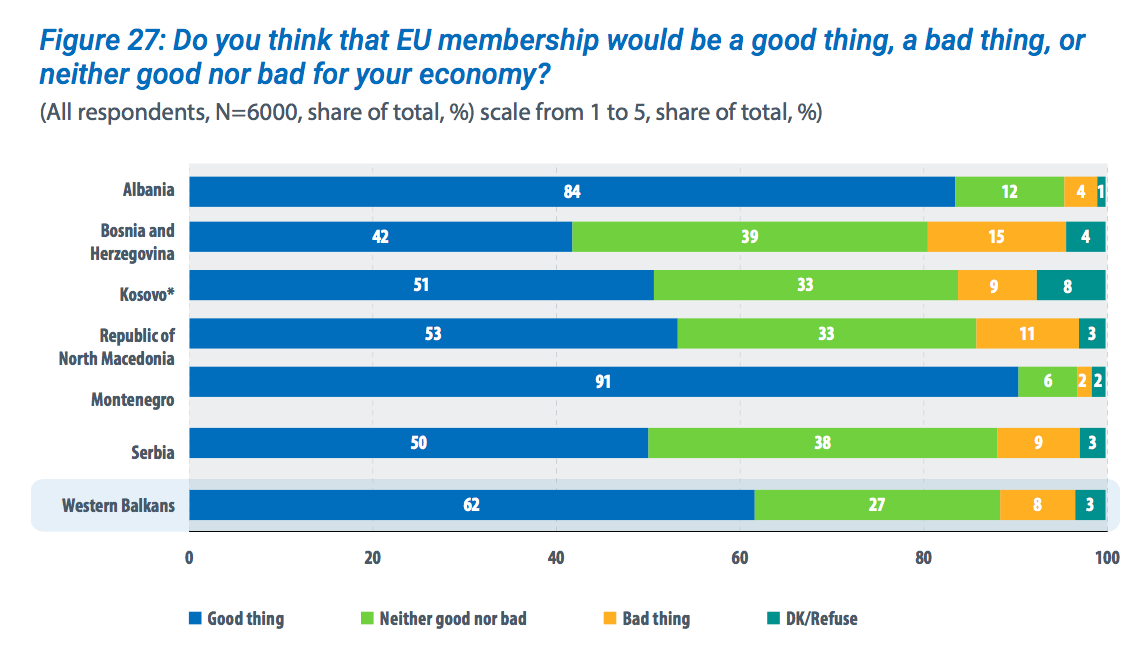 “The vast majority of Western Balkan citizens – 73% – perceive EU as the most preferred block to trade with, while the Union tops the first place as the most supportive in anti-pandemic efforts by 43% of respondents through medical and financial help – well ahead of China – 14%, Turkey – 9%, or Russia – 7%,” said Bregu.

Despite setbacks on the path towards EU accession for several countries, 62% of respondents said they are in favour of accession, up from 59% in 2019 and 56% in 2018. However, the number of respondents that expect EU accession by 2025 continues to decline, which the report says, indicates “a more realistic outlook on the region’s accession prospects”.

The BPSI is made up of two sub-indices, BPSI-Present Situation Index and BPSI-Expectation Index, which monitor the present sentiment of SEE citizens and their expectations for the future respectively.

The results for 2020 showed that sentiment remained relatively flat compared to 2020, but future expectations fell sharply. 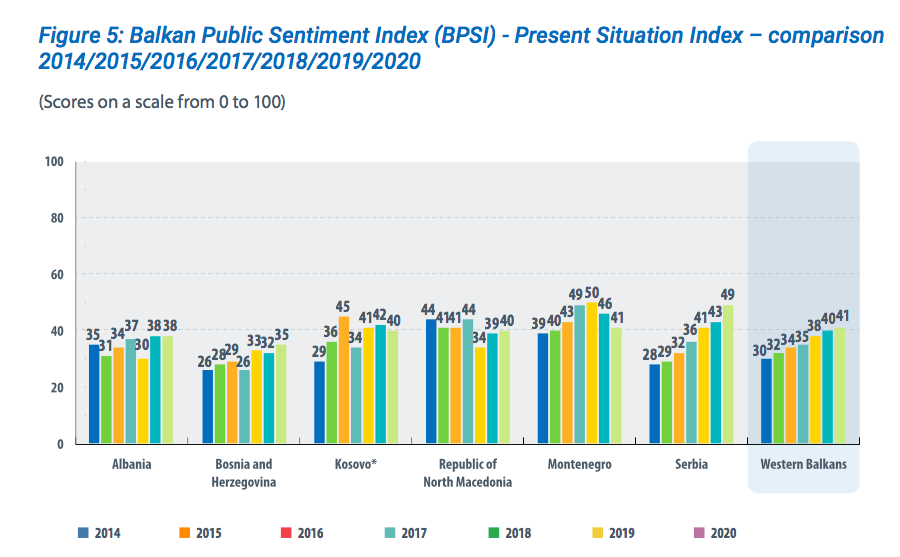 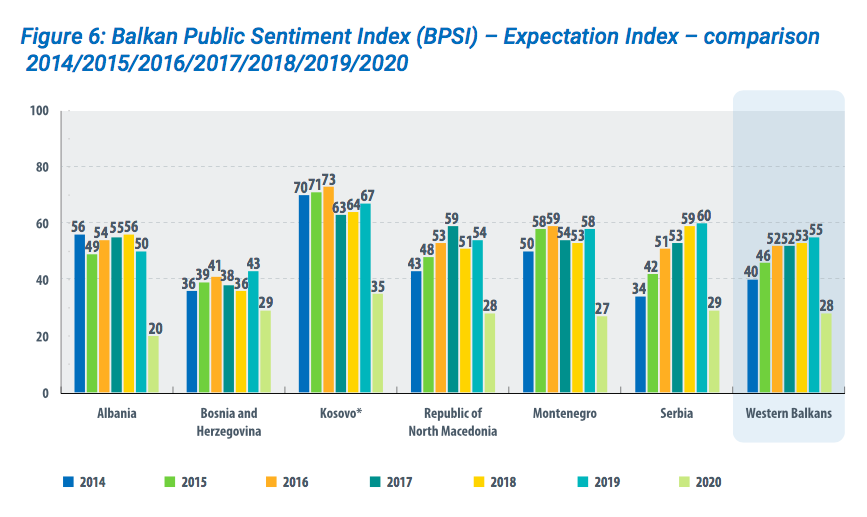 Looking at the results since 2014, when the survey was first carried out, the report says: “From a closer perspective, results by economy indicate that over the seven-year period, Serbia leads on public sentiment survey, scoring a remarkable 24-point rise across the period. This improvement comes mostly as a result of a good economic performance followed by the lowest unemployment rate in the last decade. In contrast, Bosnia and Herzegovina, despite a 7-point increment in public sentiment (from 30% in 2014 to 37% in 2020), remains the economy with the lowest level of life satisfaction in the Western Balkans.

Bregu noted that the decline in public and business sentiment across the region in 2020 “is not surprising if we consider the actual output loss in terms of GDP in the Western Balkans that amounts to -5%.”

Views voiced were inevitably influenced by the pandemic that led to health and economic crises across the region, with three-quarters of respondents saying they saw a high level of threat to their national economies. “Economic impact of COVID-19 remains the main risk, 43% are concerned about losing their own or their family members’ jobs in the next 12 months, and 46% report that their income has decreased. At the economy level, unemployment is actually more worrying for citizens than the virus itself,” said the report.

“There is also widespread scepticism among the survey population over governments’ efforts to protect people from losing their jobs during the pandemic. Overall, 39% disagree that their governments are doing enough, 34% are neutral, and 18% think they do enough,” it added.

Unsurprisingly people were most positive about the government’s efforts in Serbia, which was able to launch several large substantial stimulus packages as well as embarking on an early vaccination drive, while they were most pessimistic in Bosnia.

The survey showed few changes in citizens’ expectations about the state of their economy compared to the previous year, with 30% of respondents expecting their economy to improve, while 26% were pessimistic.

“The region’s leading pessimist is again Bosnia and Herzegovina, with this year’s results representing a two-point rise in the economy’s overwhelmingly gloomy predictions for the future (only 14% expect a better economic situation in the next 12 months),” said the report.

Unemployment and economic development were picked at the main problems facing the region, with a significant number also naming corruption and the state of the health sector. 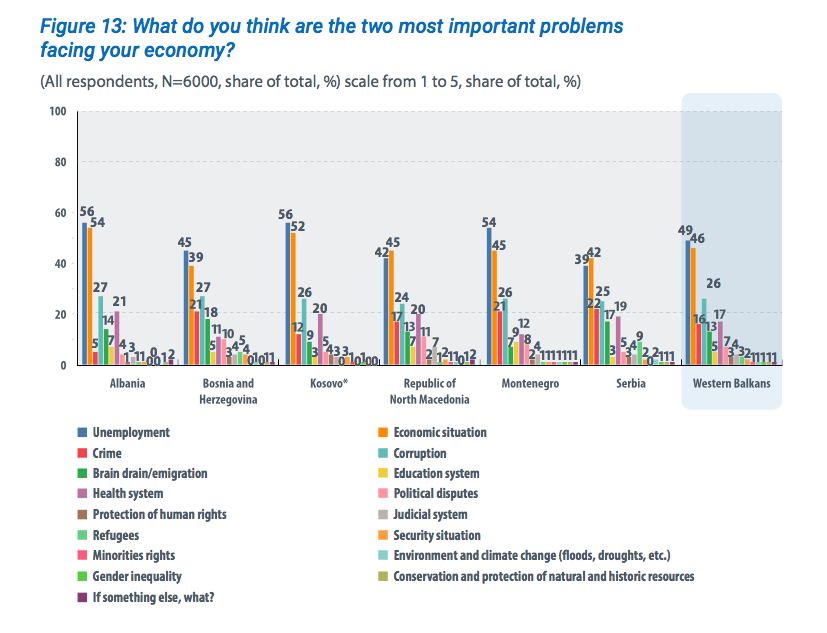 “The COVID-19 pandemic has not only unfolded socio-economic consequences, but has also stricken the regional health system, causing even more insecurity in the public eye,” according to the report.

Broken down by country, citizens of Albania, Montenegro, Bosnia and Kosovo listed unemployment and the economic situation as their chief concerns, while the economic situation predominated in North Macedonia and Serbia. Significant numbers in Bosnia (21%), Serbia (22%) and Montenegro (21%) voiced concerns about corruption. On the other hand, fewer respondents expressed concerns about the brain drain and emigration than in previous surveys.

Bregu attributed this to the pandemic. “[The] pandemic shifted opinions and influenced realities. People are more hesitant to leave and work abroad – 37% of citizens would do it – a decreasing trend in comparison with last year. The rationale behind it: pandemic,” she said.

The survey revealed a high level of climate awareness, with three-quarters of respondents concerned about climate change and pollution, and 62% willing to pay more for environmentally friendly products.

The report notes that “trust in institutions has improved slightly, yet key aspects such as the rule of law, equality before law and their treatment by public institutions have seen stagnation”.

61% of respondents distrust parliaments and courts, and more than half them assessed their judiciaries’ performance as poor or very poor. A majority sad they disagree with the proposition that judicial systems, ombudsperson institutions, supreme audit institutions and media are independent of political influence. Healthcare, political parties and rule of law institutions were named as the most corrupt.

“You should not be puzzled by the fact that, same as the last year, public institutions are looked upon with a steadily rising dose of distrust. It is too blatantly displayed and this is not at all surprising,” said Bregu.

“There seems to be a clear correlation between low trust in institutions and government performance, as well as their perceived independence and vulnerability to corruption, on the one hand, and apathy towards government decision-making, on the other,” said the report.