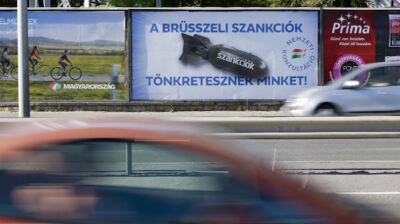 Despite a massive media campaign costing at least €12mn, less than 1.4mn Hungarians, or 17% of eligible voters, filled out the government’s latest national consultation survey gauging people’s view of the EU’s sanction policy against Russia. This is the lowest number since the radical rightwing Fidesz government first began using referenda as political-communication campaign tools to dominate public discourse in 2005.

More than 97% of respondents said they are against EU sanctions on Russia, according to the final results. The number of respondents in the survey is less than 50% of the votes for the ruling party in the 2022 parliamentary election and is around two-thirds of the party's estimated 2mn large loyalist base.

Some 97% rejected the European Union's "detrimental" sanctions against Russia, government spokeswoman Alexandra Szentkiralyi commented, adding that sanctions have failed to stop the war and have caused "extreme economic difficulties" to Europe.

The government rolled out the national consultation survey in October, asking people’s views on sanctions against Russian oil, gas and nuclear energy and tourism among other sectors.

The questionnaire was previously described as misleading due to labelling of the bloc’s punitive measures as "Brussels sanctions" or imposed by "Brussels leaders" while omitting the fact that all punitive measures against Russia had been approved by Prime Minister Viktor Orban. Hungary also received an exemption from EU sanctions on Russian pipeline crude oil delivery or nuclear energy cooperation.

The government has ramped up its anti-Brussels rhetoric as the cost of living crisis deepened. Retail energy prices (over average consumption levels) soared after the overhaul of the retail energy subsidy scheme in the summer, and Hungarian food inflation is the 10th highest globally.

The government introduced fiscal adjustments to plug the gaping hole in the budget. It abandoned its energy subsidy scheme in place since 2014, put off state investments and slapped windfall taxes on energy, banking, retail and pharma firms.

Hungary's strongman can take solace from the overwhelming majority, but the results will add little to shore up its "bargaining position" in the European Council in arguments against the sanctions.

The European Commission's reaction was that sanctions in the EU are made by member states in unanimity and Budapest needs to convince the other 26 members.

The Orban government has regularly cited massive public support to back up its policies in earlier referendums, such as the one related to the EU's migrant relocation plan in 2016 (3.26mn in support), or the child protection referendum (3.61mn) held on the same day as the election last year.

Independent media put the cost of the national consultation, including printing, postal services and advertising at around HUF7bn (€17.5mn), excluding Facebook and other online social media spending. Some half of the money went for the billboard posters designed by New Land Media and Lounge Design, two companies owned by Gyula Balasy, dubbed by local media as the Lorinc Meszaros of Hungary’s PR and communication sector.

Hungary’s streets were flooded with billboards reading 'Brussels sanctions are destroying us,' depicting EU sanctions as a bomb. The European Commission denounced the poster campaign as "inappropriate".

The opposition has also filed a complaint against the government for scaremongering and threats of public endangerment for the use of the sanctions bomb depiction, but their requests were turned down by authorities. Hungary’s Advertising Association also declined to launch an ethics probe.