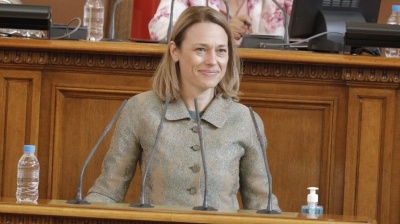 Iva Miteva was voted in as Bulgaria's parliament speaker in July. / parliament.bg
By Denitsa Koseva in Sofia August 25, 2021

Iva Miteva, Bulgaria’s parliament speaker, said she does not want to become a prime minister, responding to suggestions by two political formation that she has all the necessary qualities for the job.

Earlier in August, members of Democratic Bulgaria and Stand up.BG! We Are Coming (ISBG) suggested that Miteva, of the There Are Such People (ITN) party, could be nominated for prime minister.

“I am not ready to be a premier. I believe that person should know his place, to be there where he is the best prepared [to be],” Miteva told reporters on August 25 as quoted by Dnevnik news outlet.

She added she had not held talks with members of Democratic Bulgaria or ISBG prior to their suggestions she could be nominated for the post.

The proposal by Democratic Bulgaria and ISBG was seen as yet another attempt to form a ruling coalition and avoid a new snap vote.

It's unclear how ITN will respond. Earlier, ITN’s leader, the showman Slavi Trifonov, said his party will not participate in coalition talks and will go into opposition, after Democratic Bulgaria, ISBG and the Bulgarian Socialist Party (BSP) refused to back an ITN-led government.

ITN won the July 11 snap vote but with a slim lead of 65 MPs, followed by former ruling party Gerb with 63 MPs. The day after the vote, Trifonov said his party would not enter in coalition with any formation and proposed a government to be headed by former minister Nikolai Vassilev. This nomination provoked strong negative reactions and Trifonov gave up this proposal.

His party subsequently started talks with Democratic Bulgaria, ISBG and the BSP on common policies but refused to sign any document committing to specific reforms. Moreover, the party refused to discuss nominations for ministers with the three formations in advance, arguing that Democratic Bulgaria, ISBG and the BSP must back them without written agreements.

After ITN’s second proposal for a government – made after the party received the first mandate from Radev – the president gave the second mandate to Gerb. The party returned it immediately. Now Radev can pick any of the remaining political parties in parliament for the last mandate and, if it also fails, the country is heading for a new early election in the autumn. According to analysts, the chances for success of the third mandate are slim at around 1%.

COMMENT: The new Cold War will be different, and not only because of China
National hero commemoration puts North Macedonia’s police on high alert
EU and G7 agree on Russian petroleum product price caps