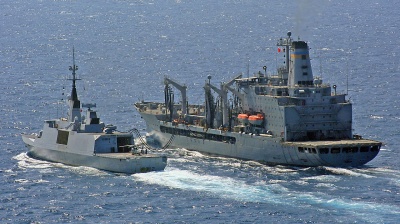 France has temporarily pulled out of a Nato security operation amid its major row with Turkey over Ankara’s alleged violation of an arms embargo against Libya.

The French defence ministry on July 2 said France had suspended its participation in Operation Sea Guardian. The move also comes after Turkish ships allegedly targeted a French warship in the Mediterranean. Turkey has strongly refuted the claim and a Nato investigation into it was inconclusive. France, meanwhile, has been calling on EU countries to hold urgent talks on the bloc’s future relations with Turkey.

It is clear that Paris is unhappy at the foothold Turkey has gained in Libya by militarily supporting the Tripoli-based Government of National Accord (GNA) against the Libyan National Army (LNA) forces of General Khalifa Haftar in the Libyan Civil War. As bne IntelliNews has reported, there are fears that the outcome of the conflict could leave both Turkish and Russian military bases in Libya staring across the Mediterranean at France, Italy and other European states. Turkey has recruited militia fighters in the Syrian Civil War whom it has transported to Libya to fight on the side of the GNA, causing French President Emmanuel Macron this week to accuse Turkish counterpart Recep Tayyip Erdogan of massively importing jihadists into the country in a “criminal” intervention by “a country that claims to be a Nato member”.

Oil-rich nation Libya is a key transit point for migrants heading to Europe from Africa. France and other EU nations are already deeply unhappy at how Turkey has in recent months encouraged Syrian migrants it is hosting to attempt to enter the bloc by crossing its border with Greece.

French relations with Turkey are also strained over Turkey's drilling in the eastern Mediterranean, some of which is said to infringe the exclusive economic zone of Cyprus.

Tensions between Paris and Ankara reared up on June 10 when French frigate Courbet moved to inspect a Tanzanian-flagged cargo ship, the Cirkin, off the coast of Libya, to check if it was smuggling arms in contravention of a UN ban.

The French ship was participating in Nato's Operation Sea Guardian, the objectives of which include maintaining freedom of navigation and conducting a "maritime counter-terrorism" role.

Turkey's foreign minister, Mevlut Cavusoglu, on July 1 asked France to apologise for its allegations about the Courbet. Ankara has accused France of supporting the LNA in the Syria conflict. The LNA is also backed by Russian mercenaries and Russia appears to have flown fighter planes, stripped of their markings, to one of its desert air bases in response to GNA gains assisted by Turkish drones. Cavusoglu said France has been "destructive" in the North African nation. He also accused it of trying "to increase Russia's presence in Libya".

After France suspended its role in Operation Sea Guardian, a French official told Reuters: "It doesn't make sense to keep our assets... with allies who do not respect the embargo."

Turkey has also upset Nato allies with its actions in Syria and purchase of Russian S-400 air defence missile systems viewed as a threat by the US and the military alliance to the performance data of the US F-35 fighter. The US has refused to deliver F-35s to Turkey as a result.

There is also the danger that tensions between Turkey and neighbouring Greece could reach fever pitch over migrants, drilling rights and longstanding issues over territorial claims.

Turkey will not give up on its role in Libya easily. Its economy remains fragile and short of revenues. Erdogan, under political pressure at home and wont to whip up nationalist support with military adventurism, would clearly like to use his Libya leverage to secure some hydrocarbon rights—Turkey is almost entirely reliant on energy imports—while there is also the prospect of earning tens of billions of dollars from post-war reconstruction in the country and recovering big sums Turkey claims Libya still owes from previous contracting work carried out prior to the nation becoming embroiled in its conflict.

On July 1, it was reported that a Turkish business delegation was set to visit Libya within two weeks to assess how Turkey’s companies and banks can help rebuild the war-torn country and secure its energy needs.