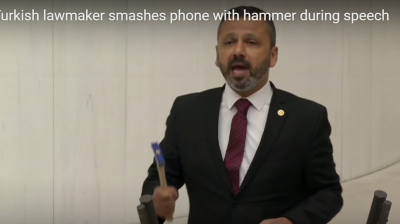 A Turkish lawmaker smashed a phone with a hammer during a speech opposing a so-called “disinformation and fake news” law passed by Turkey’s parliament late on October 13.

As he hit the phone with a hammer at the dais in parliament, Burak Erbay served a warning to Turks, saying: “You have only one freedom left, the smartphone in your pocket which has Instagram, Facebook, YouTube which you can communicate with. If the law passes the parliament, you can break your phones and throw them away like this—my young brothers and sisters.”

After the law was passed, Turkey's main opposition group Republican People’s Party (CHP) said it would ask the country’s top court to throw out the media legislation under which people can be jailed for spreading "misinformation". It said the legislation amounted to unprecedented censorship.

The law was proposed by President Tayyip Erdogan's ruling Justice and Development Party (AKP), which said it was aiming to regulate online publications, protect the country and combat disinformation. The legislation has been put in place with the long run-up to the parliamentary and presidential elections, which must take place by next June, under way. With most media in Turkey is pro-government, Turks looking for independent coverage and discussion of Turkey’s affairs often turn to social media.

The law's Article 29 says those who spread false information about Turkey's security to "create fear and disturb public order" will receive a prison sentence of one to three years. Erdogan still needs to approve the bill.

"We are talking about a law that is the most oppressive in our history and the law that contains the most censorship," Erbay, a member of the CHP, said.

"It is a regulation that takes us down to the level of underdeveloped societies," Erbay told Reuters.

Hundreds of journalists have been jailed in Turkey since the 2016 coup attempt, mainly on terrorism charges. Ankara has claimed the crackdown was necessary in the face of a major security threat facing the country.

The Venice Commission, which advises the Council of Europe rights watchdog, said it is especially concerned about consequences of the law's prison provision, "namely the chilling effect and increased self-censorship [it will engender]".