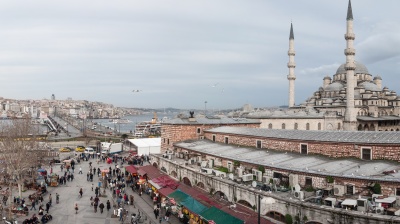 Istanbul (pictured from a spot near the Yeni Camii or "New Mosque") could be in for an even worse growth story than expected.
By bne IntelliNews April 2, 2019

Goldman Sachs has assessed that there is a risk that Turkey's economy could contract more sharply than the 2.5% the investment bank has already pencilled in for this year because of the squeeze in offshore Turkish lira (TRY) liquidity initiated last week.

In an April 1 note to investors, the bank's Clemens Grafe and Murat Unur looked at what consequences might stem from the move against liquidity—widely seen as conducted at the behest of Erdogan administration officials who were battling to prevent a stark depreciation of the lira in the run-up to the weekend local elections—which caused London swaps market overnight rates for the TRY to soar to a scarcely believable 1,200%.

While the spread between onshore and offshore rates had now fallen from exceptional levels, Goldman said it expected the offshore liquidity decline to have lasting effects.

Grafe and Unur said in their note that recession-hit Turkey's banking system showed a surplus of foreign currency funding, due to high deposits and wholesale funding. That meant Turkish banks have relied on offshore swaps to fund lira borrowing.

"While it is possible that the swap market will normalise over time, we suspect that the recent volatility will result in liquidity premium remaining higher, leading to a tightening in domestic financial conditions," the analysts wrote to clients.

"This implies downside risks to our below-consensus GDP growth forecast of -2.5 percent for the year."

Eyebrows raised at fall in FX reserves
The analysts raised their eyebrows at Ankara's most recent weekly data on net international reserves. They fell to $26bn on March 22 from $29.2bn at the start of 2019.

"This fall in net foreign assets is surprising, given that the government has net borrowed about $4 billion in foreign currency abroad and another $4.5 billion domestically this year so far," the analysts wrote.

Turkey’s central bank has said that the decline in FX assets was the result of external debt repayments and payments to state-owned energy companies. But the analysts noted that payments of this scale to state-owned firms looked inconsistent with historical levels.

"Importantly, the pressure on reserves occurred despite the current account being largely in balance and foreign debt service having been relatively low in Q1. Instead, we think that the main pressure was a consequence of a restart of local dollarisation flows."

There are various predictions from analysts as to how painful Turkey’s recession will turn out to be. A recent Reuters poll median anticipated that the economy would expand 0.2% in 2019, well below the government's sharply lowered forecast of 2.3%.

The Organisation for Economic Co-Operation and Development (OECD) last month cut its forecast for Turkish growth in 2019 to -1.8% from -1.4%.

The TRY last year lost around a third of its value versus the USD amid a currency crisis. It has shed nearly 5% year-to-date, with most of the losses seen in March. In the past week it has been extremely volatile, roughly trading in a range of from 5.32 to 5.61 against the dollar.

Goldman predicted the central bank would raise its benchmark lending rate by 150 bp at its next policy meeting on April 25. This would follow the sudden move it made last week to suspend one-week repo auctions. That forced borrowers to tap higher-rate windows.

Goldman previously thought an interest rate cut might be introduced by the central bank as soon as June. Its latest prediction is that there will be no such loosening until the last quarter of 2019.