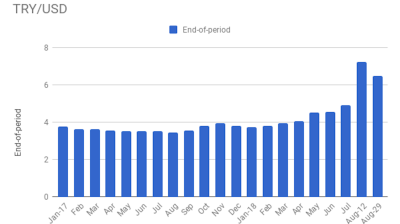 Moody's Investors Service has downgraded 18 banks and two finance companies in Turkey, the rating agency announced in a written statement on August 28. In a separate statement released on the same day, Moody’s said that it has taken rating actions on 13 non-financial corporates domiciled in the country.

The Turkish lira (TRY) was again feeling the heat on August 28 as markets struggled to find coherence in Ankara’s approach to tackling a currency crisis that threatens to turn into a much wider financial crisis. It weakened 2.67% d/d to 6.4403 against the dollar as of around 20:50 local time. The day saw the benchmark Istanbul stock exchange BIST-100 index close down 0.62% at 93,280.71.

Moody's downgrading of the lenders concluded a downgrade review initiated on June 7 on 17 banks and two finance companies.

The downgrades primarily reflected a substantial increase in the risk of a downside scenario, where a further negative shift in investor sentiment could lead to a curtailing of wholesale funding. The rating agency also noted that Turkey's operating environment has deteriorated beyond its previous expectations, and said it expected that it would continue to so. Moody's has captured these challenges by lowering Turkey's Macro Profile to Weak- from Weak.

Highly reliant
Turkish banks are highly reliant on foreign currency funding and had market funds of around $186bn denominated in foreign currency as of June 2018, equivalent to 75% of their total wholesale funds. This makes the banking system particularly sensitive to potential shifts in investor sentiment, as these foreign currency liabilities must be refinanced on an ongoing basis, Moody’s warned.

In the next 12 months around $77bn of foreign currency wholesale bonds and syndicated loans, or 41% of the total market funding, needs to be refinanced. The Turkish banks hold around $48bn of liquid assets in foreign currency and have $57bn of compulsory reserves with the Central Bank of Turkey, which would not be entirely available.

In a downside scenario, where investor sentiment shifts, the risk of a prolonged closure of the wholesale market would lead most banks to materially deleverage, or to require external funding support from the government or the central bank, according to the rating agency.

Moody's noted that, after years of credit-fuelled growth (GDP growth in 2017 was 7.4%, outdoing the expansion of China), the combination of tighter financial conditions, and a weaker exchange rate (the TRY to the dollar exchange rate has weakened by around 40% in the year to date) that is associated with high and rising external financing risks, are fuelling inflation and undermining growth.

Moody's forecasts Turkish GDP growth of just 1.5% in 2018 and 1% in 2019, and an inflation rate of 20% in 2018 and 14% in 2019. However, there is considerable uncertainty, and further downside risks to Turkey's growth prospects, both short- and medium-term, remain. Lower growth, and a weaker lira, will have a negative impact on banks' asset quality, profitability, and capital, beyond the rating agency's previous expectations. Some analysts have already pencilled in a 2019 recession, saying the only question is show deep it will be.

August 30 is a public holiday in Turkey.