Mongolians and chess, almost as traditional as herding and wrestling 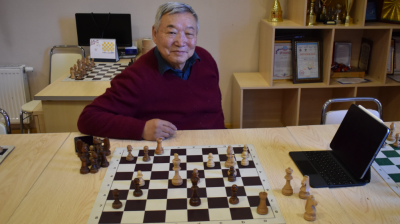 At this year's 44th World Chess Olympiad, Mongolia shook up the world when the Mongolian women’s team defeated the seventh-ranked Americans. Overall, the Mongolian men’s team placed 35th out of 188 countries, while the women placed 15th out of 162.

When one thinks of Mongolia, one very probably thinks of horses and wrestling, but certainly not chess. But chess has a long history in the country. Mongolians’ ancestors played ankle bones and chess during the 13th century, and possibly before, while Mongolian traditional chess, shatar, dates back to the Great Mongol Empire.

The Mongolian word for international chess is in fact shatar. A medieval variation of the game is called Hiashatar, which means “Bodyguard Chess” (Shatranj). The pieces are the same as in traditional chess except that there is an additional piece called a Bodyguard (also called 'Senior Adviser' or 'Warrior'), which can slide one or two steps in any direction. However, a Bodyguard cannot checkmate the enemy king. 'Hiashatar' is believed to be about 500 years old. 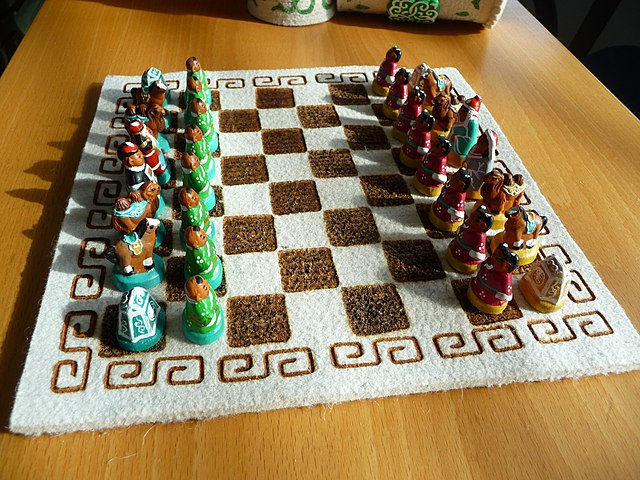 An ancient legend about the origin of Mongolian chess tells of a khan, or king, who lived “long, long ago”. After fighting in many wars, he decided that training alone was not enough for victory. So, he established the position of bodyguard in his entourage, and the position was then added to the game of chess.

The Mongol names for the pieces are: 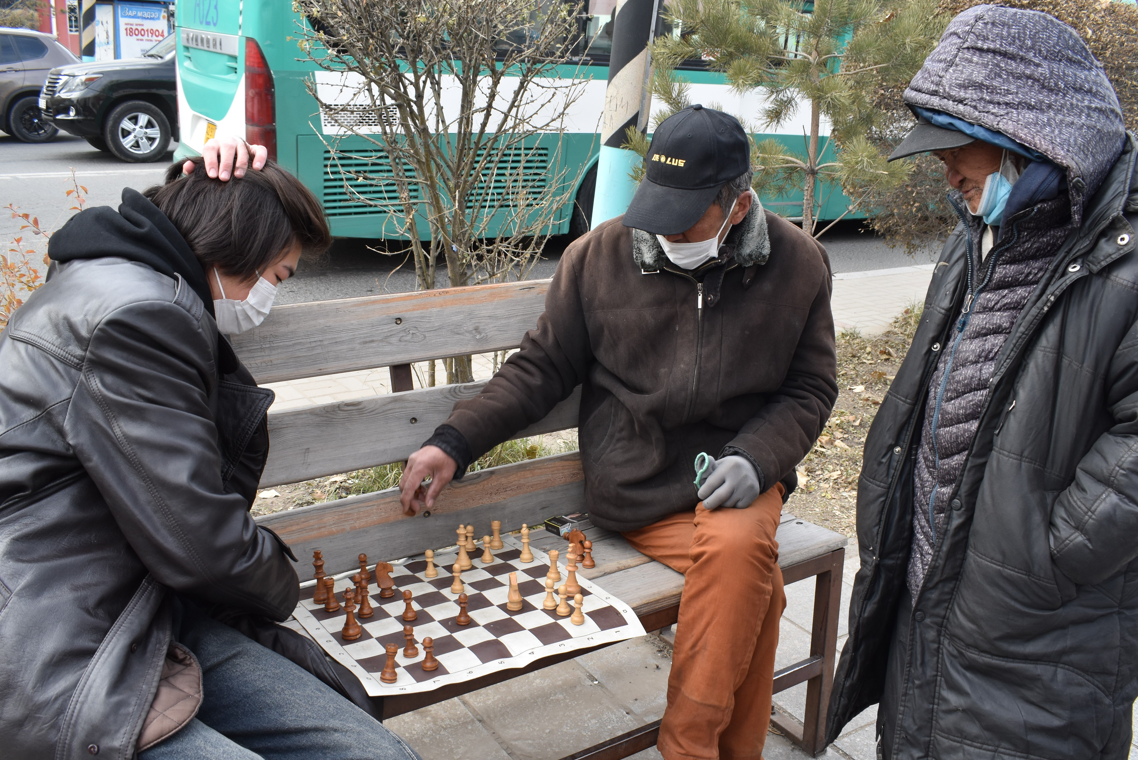 Chess is hugely popular in Mongolia, it's not unusual to see a game taking place on a bench (Photo courtesy of Antonio Graceffo).

One of the proudest achievements for Mongolians in international chess came in 1967 at the Sousse Interzonal when American Bobby Fischer played against Mongolian champion Lhamsuren Myagmarsuren. Myagmarsuren won the Mongolian national title four times in 1965, 1980, 1981 and 1982, and was awarded the title of international master in 1967. His nickname in the Internet Chess Club is "Shatar” (the Mongolian word for chess).

In 2020, the International Chess Federation awarded stipends to a number of retired players including Lhamsuren Myagmarsuren. His match with Fischer has inspired Mongolian chess players down the decades. There is even a photo of Lhamsuren Myagmarsuren hanging in Zuunii Shatar chess club near the centre of Ulaanbaatar.

In recent years, Mongolia has repeatedly distinguished itself in international chess. Khulan Enksaikhan (25) led her team to gold at the 2020 Asian University Chess Championship (AUC). In 2021, 12-year-old N. Sodbileg won a silver medal at the under-17 World Amateur Chess Championship held in Rhodes, Greece.

In 2021, a most unique chess honour was won by Mongolia, when Mongolian inmates won the first ever Intercontinental Online Chess Championship for Prisoners. In October this year, the Mongolian women’s chess team won the 2nd Intercontinental Online Chess Championship for Prisoners. The event, organised by the International Chess Federation (FIDE) and the Cook County Sheriff’s Office (Chicago, US) was the largest chess event ever organised among correctional facilities.

International master and world grand master Batchimeg Tuvshintugs, who works at the Court Decision Making Agency of Mongolia, teaches chess in prisons and organiss tournaments. She explained that Mongolia has been organising chess events in its prisons since 1956, and it has now become a tradition.

FIDE president Arkady Dvorkovich attended the online closing ceremony where he congratulated the winning teams and extended a special message of encouragement "We all hope that at some moment of your life, you will be free to make your own choices, and chess will help you to make those choices rationally."

Tuvshintugs told Chess News that it was no wonder that the prisoners could play chess so well because the Mongolian amateur chess level was quite high, a sentiment supported by 76-year-old international chess master Jigjidsuren, coach of the Zuunii Shatar chess club, who believes that Mongolian children are exceptionally intelligent and particularly good at chess.

Jigjidsuren began playing chess in 1960 at the age of 11. He originally learned by watching his parents play in the countryside. Later, he studied under both Mongolian and Russian masters, eventually being admitted to the Russian chess university in 1971. He graduated in 1975. After a lengthy career as a world-class chess player, Jigjidsuren was asked to coach the national team, a job he did until he turned 70. Since his retirement, he has been coaching at Zuunii Shatar chess club.

Jigjidsuren explained “Mongolian children are very good at chess actually. The reason why is that Mongolians are much more intellectual and have a high brain capacity. And I came to this conclusion by observing many, many kids along the way of coaching and teaching lessons to the children.”

He estimated that 30 to 40% of the Mongolian population knows how to play chess. “We don’t have an exact number on this, but by observation, I have seen an instance where the whole town can play chess in the countryside. It is actually a rare occasion to find families without a chess board.”

When asked if Mongolians played chess in their gers (yurts) to kill time during the long winters, Jigjidsuren objected that while some may only be killing time, for most, “there is always a purpose when they are playing chess. The parents want their children to have a strong mind, a respectful manner and high potential, and they believe that chess helps in all those aspects.” He even drew a connection between herding and chess. “There used to be a lot of ways to educate kids back in the days of nomadic tradition.”

Chess is not only played in gers and chess clubs in Mongolia, it’s also played on the street.

Fifty-seven-year-old Naymtsogt is one of several chess experts who play outdoors, for money, on the benches in front of the central sports centre in Ulaanbaatar. He has been playing chess since he was seven. He first learned it from his parents, but later studied under Russian and Mongolian masters and grandmasters. While he can also play Mongolian chess, he focuses on international chess. Since 2008, he has been playing on the street, averaging five to six opponents per day.

Naymtsogt said that he particularly likes chess because, “There is nothing to cheat on in chess. It’s just simply a mind game. There is a lesson on how to start and how to proceed and how to end your moves and in chess you will be able to master it.” 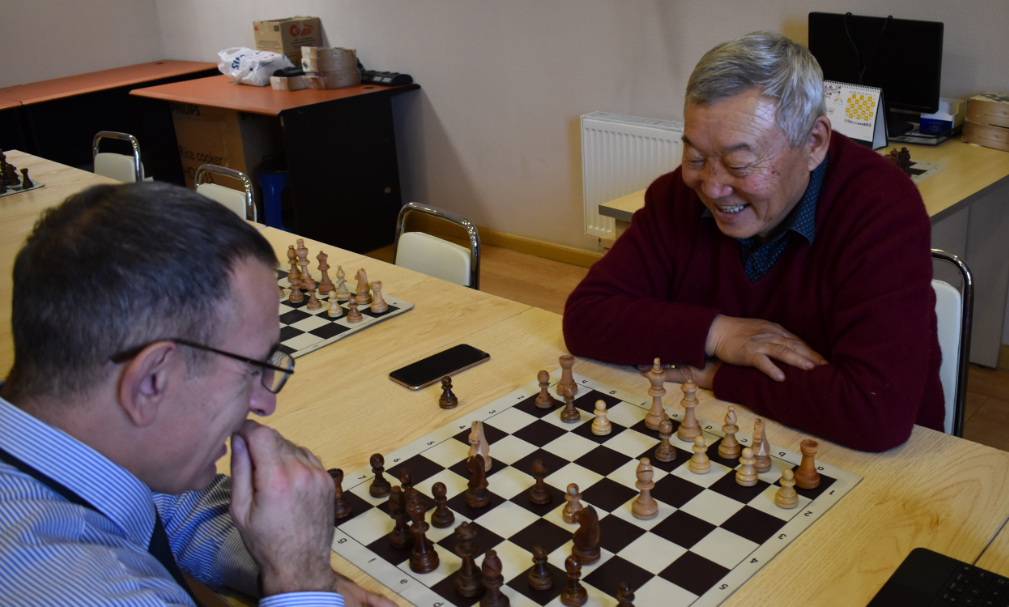 After he defeated me in a relatively long game (pictured above), he said “You’re a very aggressive player. The game itself should be played like this.” Knowing I was a wrestler, he said wrestling was the same as chess. In Europe and America, catch wrestling is often referred to as physical chess. So, it was interesting to hear a chess master make the same comparison.

Jigjidsuren went on to draw more parallels between wrestling and chess. “Wrestling is a tradition which covers a minimum number of people that have a well built or developed body. For chess, it does not require anything physical or does not depend on gender. Secondly, chess is not a seasonal sport. You can play it anywhere you want, anytime.”

And the Mongolians do play chess anywhere, anytime. In the gers, in the streets, in the chess clubs and academies, in Russia, and at the world level.

Antonio Graceffo, PhD, China-MBA, is an economist and China analyst who has spent over 20 years in Asia, including seven in China, two and a half in Taiwan, and three in Mongolia. He conducted post-doctoral studies in international trade, at School of Economics Shanghai University, holds a PhD. from Shanghai University of Sport, and a China-MBA from Shanghai Jiaotong University. Antonio is the author of seven books about Asia, three of which are about the Chinese economy. For the past 10 years, he has been reporting on the Chinese economy, the US-China trade war, investment, geopolitics and defence. Since 2019, Antonio has been based out of Ulaanbaatar, where he continues his China economic research, while also reporting on the Mongolian economy. In addition to publishing reports and articles on a regular basis, he makes frequent appearances as a China economic expert on NTD TV, Bloomberg Mongolia TV and VTV.