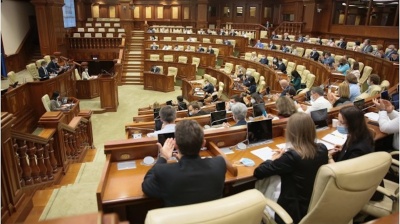 Moldovan MPs strongly criticised both the General Prosecutor's Office and the National Anticorruption Centre for their lack of progress on recovering the money stolen in the so-called $1bn bank frauds at a session on August 20.

The money was siphoned off from three major Moldovan banks, Banca de Economii, Unibank and Banca Sociala, which were later liquidated. The government issued bonds to cover the loss of the funds, with the bill ultimately to be footed by Moldovan taxpayers unless the authorities manage to recover some of the stolen money.

After hours of debate, MPs adopted a decision on the issue on August 20. The ‘Decision on the results of the parliamentary hearings on the progress of actions in the process of recovering financial means stolen from the banking system’ was backed by 57 of Moldova’s 101 MPs, reported news agency Moldpres.

The document singled out prosecutors and the NAC for the failure so far to recover the funds, which amounted to over 10% of Moldova’s GDP at the time of the thefts.

“It is found that the responsibility for organising and ensuring efficient measures on the process of recovering the financial means stolen from the banking system rests with the management of the General Prosecutor's Office and the National Anticorruption Centre,” said the decision.

"Analysing the information presented, the parliament notes the lack of measurable actions and progress in the process of recovering the financial means stolen from the banking system, and considers that the inefficient actions of the leaders of the responsible authorities unduly delay the taking of effective measures to achieve the goal," it added.

It called on the General Prosecutor's Office to examine the causes of the slow progress and to step up international co-operation with other countries' special services, including through joint investigation teams and the European Union Agency for Cooperation in Criminal Justice (EuroJust). Prosecutors have been given 30 days to prepare an "efficient, effective and achievable instrument” for recovering the funds stolen from the banking system, as well as a new action plan to implement the strategy, and to report regularly on results.

The same decision also recommended that the Superior Council of Magistracy check on progress and take all necessary measures to ensure that justice is done through the courts in cases related to the looting of the banking system and recovering stolen funds. Specifically, it referred to the importance of ensuring the transparency of the administration of justice and the observance of the Code of Ethics by judges.

The parliament’s Committee on Legal Affairs, Appointments and Immunities jointly with the Committee on National Security, Defence and Public Order will monitor in parliamentary procedures for investigating the robbery from the banking system and the progress of actions taken by public authorities in the recovery process.

Immediately after her Party of Action and Solidarity (PAS) won the July 11 general election, President Maia Sandu stressed that people are waiting to see the authors of the frauds in the banking system in jail and insisted that the rule of law is the key to Moldova’s development.

In the years that Moldova was under the sway of oligarch and politician Vlad Plahotnuic, there were repeated warnings that Moldova was becoming a captured state, with the control over the judiciary a particular concern. When Socialist Party leader Igor Dodon won his power struggle with Plahotnuic, critics say that rather than cleaning up Moldova’s institutions, Dodon sought to control them himself. Sandu and her PAS came to power in late 2020 and mid-2021 respectively, pledging wide-reaching reforms and a crackdown on corruption.

One of the main steps taken since the PAS came to power following its landslide victory on July 11 was to seek to oust head prosecutor Alexandr Stoianaglo, a Dodon-era appointee. Earlier this month, the Supreme Security Council, headed by Sandu, criticised the Office of the Head Prosecutor for not addressing the major corruption schemes in the country and Minister of Justice Sergiu Litvinenco sent to parliament a draft bill under which the head prosecutor can be evaluated and eventually dismissed by the president. Among the criticisms were the sluggish trial of businessman and politician Ilan Shor over his suspected involvement in the $1bn bank frauds and prosecutors’ decision to drop charges against Veaceslav Platon in connection to the Russian Laundromat. However, Stoianaglo and representatives of the Supreme Prosecutors Council have both indicated they will fight back against attempts to remove the chief prosecutor from his position.