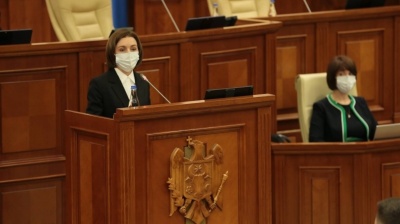 Moldova’s President Maia Sandu opened the first session of the new parliament, where her Party of Action and Solidarity (PAS) holds a comfortable majority, with a message of “zero tolerance for corruption”.

“We need swift and incisive action to fight corruption,” Sandu said in her speech held at the opening of the new parliament on July 26.

She stressed that people are waiting to see the authors of the frauds in the banking system — which resulted in losses of around $1bn eventually covered by Moldovan taxpayers — in jail and insisted that the rule of law is the key to Moldova’s development.

"For the corrupt and compromised, I have a simple message: do not try to resist, you cannot hide behind the independence of justice when you have been in the service of thieves for years. We will do what people ask us to do. For the honest and professional in the judiciary, I also have a message: continue to do your job as you have learned, without fear and have the courage to speak when you see irregularities,” the president said.

Sandu also talked of the other major challenges facing the country: “Moldova has recently been hit by a pandemic and economic crisis, has been facing poverty, corruption and migration for decades, A large part of people, and especially young people, no longer trust the possibility of a good future at home,” the president said in her address to parliament.

“The government will be voted on in the coming days. Together with parliament, it must find urgent solutions to a multitude of problems caused by the irresponsibility and corruption of previous governments. They need to find solutions to get the state out of the pitfalls created by previously signed damaging contracts. It must bring state-owned enterprises out of bankruptcy. It must recover important state property. It must clean the state institutions, one by one, of corrupt interests and ensure their functionality. It urgently needs to restore external funding. It needs to unblock important projects, including infrastructure, that are stagnant due to corruption or poor implementation capacity,” she added.

Sandu also stressed the importance of making the parliament’s work transparent and putting up laws for public consultation.

At the session, lawmakers announced the first two topics to be quickly tackled in public consultations: the functioning law on the National Agency for Integrity (ANI), which is currently in limbo, and the new regulations for the fuels market (in force already).

Both topics relate to laws passed by the majority in the previous Parliament, formed by the Socialists (PSRM) and the MPs controlled by fugitive businessman Ilan Shor.

The law related to ANI has already been referred by the pro-EU PAS to the Constitutional Court, and the two laws significantly impair the functioning of the agency supposed to check the wealth of top public servants and politicians and the fuel market respectively.

The amendments to the ANI law, suspended by the Constitutional Court, provisions shorter prescription terms and invalidate a large part of the files prepared by the agency’s officers regarding members of the Socialist Party. The amendments affect the Criminal Procedure Code as well.

Moldovans respond to latest blackout with solidarity for Ukraine
Ukraine faces one of worst declines in GDP from a war, says EBRD
EBRD warns of risk of 'zombification'