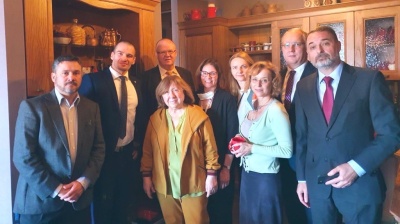 Nobel laureate Svetlana Alexievich is the only remaining member of the Presidium of the newly established Coordinating Council still at liberty in Belarus. Several European diplomats gathered in her apartment to protect her from arrest / wiki
By bne IntelliNews September 9, 2020

Missing opposition leader Maria Kolesnikova has been found in the Minsk remand prison #1 on Volodarskogo Street, according to her father Alexander.

“The head of the investigative group of the main investigation department of the IC Vasilyuk called me and informed me that she was arrested. He offered to make a transfer,” Alexander Kolesnikov said as cited by TUT.by.

The dramatic disappearance and spy novel-like attempts to force her to cross into Ukraine came on the same day that Belarus' self-appointed President Alexander Lukashenko gave a two hour-long rambling interview to the head of RT, Margarita Simonyan, and three other senior Russian journalists – his first big interview since the August 9 elections – in which the incumbent made it clear he has no intention of stepping down.

Kolesnikov was looking for his daughter, who was snatched on September 8 only to turn up 18 hours later when the authorities plans' to forcibly expel her were thwarted after she ripped up her passport. Unable to enter Ukraine, Kolesnikova was taken into custody again and transferred back to a pre-detention facility in Minsk.

Kolesnikova’s arrest means that six out of seven members of the Presidium of the newly established Coordinating Council are currently either in prison or have been expelled from the country.

Prominent lawyer Maxim Znak has also been detained on September 8; he is another member of the Coordinating Council Presidium.

Only the Nobel laureate Svetlana Alexievich remains free in Belarus, but has already had a visit from unknown persons in civilian clothes. Western diplomats have now gathered at her home to offer her some measure of protection.

Kolesnikova is one of the trio that campaigned against Belarus' self-appointed President Alexander Lukashenko in the August 9 elections and united the country against the incumbent. Svetlana Tikhanovskaya is the nominal winner, but was forced out of the country under duress only a few days after the election and is currently in Lithuania with her children. Her husband Sergei remains in prison, as he was arrested before the elections on insurgency charges. Veronika Tsepkalo was the third member of the team and is married to another presidential candidate, Valery, who was excluded from the ballot and fled to Moscow fearing arrest.

The arrests of almost all of the prominent Coordinating Council members are part of a scaling up of the repression by Lukashenko against the opposition.

Arrest have begun again and a total of 633 people were detained during the Sunday mass protests under the slogan “for unity”, where between 100,000 and 200,000 Belarusians marched. The military presence had been escalated and the centre of Minsk closed off with barbed wire and barriers.

At the same time, OMON riot police crossed another line on September 8 when they began to manhandle and arrest women demonstrators. Until this point the OMON has been notably reluctant to use force on Belarusian women demonstrators, giving them a certain immunity they have used to protect male protesters targeted by the police. But that came to an end on September when OMON started to body-push and carry women to waiting paddy wagons.

The president has rejected out of hand opening talks with the Coordinating Council, but has launched a campaign to try to defuse the tensions in the country.

Lukashenko has proposed a strategy to resolve the current political crisis to the OSCE. Lukashenko remains adamant that the only way to enact political change is via constitutional reform, which is a sop he has been offering since 2016.

Per Minsk’s OSCE proposal, the government will pass constitutional changes by referendum by 2022. These changes will weaken the presidency vis-à-vis the government and parliament and strengthen Belarus’ party system. Belarus will then hold new elections.

RBC reports that Minsk has already prepared a draft of constitutional changes but officials are awaiting Lukashenko’s approval.

Russia and Belarus’ foreign ministers reportedly discussed this plan when they met in Moscow on September 3. The constitutional change should not be seen as a concession to protesters, who will almost certainly reject this plan out of hand, as they are demanding Lukashenko's immediate resignation. 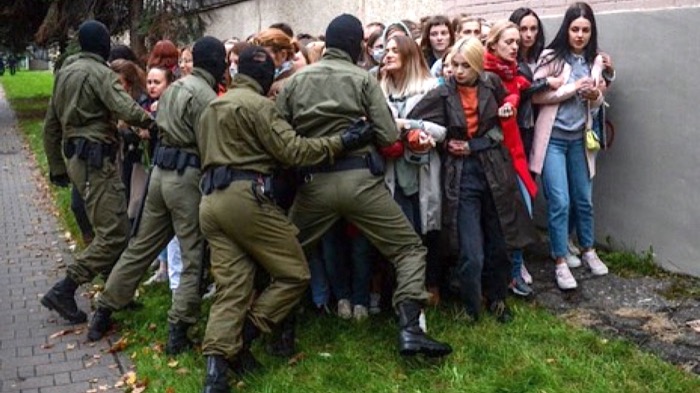 Lukashenko offered some other olive branches this week, saying that his 26 years in office “may have been excessive,” but repeated his claim that if he left office the country would collapse.

“I may have stayed [in power] a little too long,” Lukashenko told four journalists from Russian state-run media, including the head of RT, Margarita Simonyan, in his first interview since the presidential vote. “But only I can really protect Belarusians now,” he went on.

“I’m not gonna leave just like that. I’ve built up Belarus for a quarter-century, I won’t just give it up. Besides, if I leave, my supporters will be slaughtered,” Lukashenko claimed.

During the two-hour long rambling interview Lukashenko spewed out a reiteration of many of his favourite conspiracy theories and tropes about his unique role.

Amongst the many claims was that the Americans were co-ordinating the protests via the Telegram channels; that Polish spies were working to stir up the people; that the OMON strictly followed the letter of the law during their crackdown and would never, for example, beat anyone on the ground “because I told them not to,” Lukashenko said.

For their part the Russian journalists did a good job and didn't shy away from the tough questions. They grilled Lukashenko on why the population, and particularly his core blue collar workers, had turned on him. They dug into the accusations of beatings of those held in detention centres. And asked him for details of the proposed changes to the constitution and the timing of fresh elections.

In one vignette Simonyan sharply criticised the Belarusian security forces for arresting and mistreating RT correspondents during the protests and failing to release them even after they had identified themselves as working for RT – one of the very few journalistic crews that still have permission to work in Belarus.

However, she dressed up her comments as “I just want to inform you this happened,” but drilled into it until she evoked a response of: “Mistakes happen in the heat of the moment,” from Lukashenko and an admission that “excesses” happened during the authorities' “initial hot-headedness.” But he defended the riot police’s behaviour during what he said was their “defence of the country from Blitzkrieg” by outside forces intent on collapsing the country.

He also made it crystal clear that he has no intention of entering into negotiations or of stepping down. Speaking of his appearance outside the presidential palace with an automatic rifle, he said: “It meant only one thing: I haven’t fled and I’m ready to defend my country to the end.”