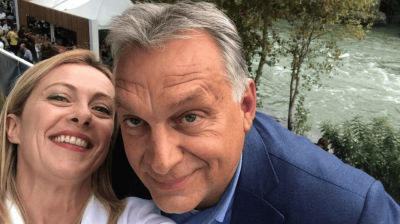 Italian right-wing nationalist party leader Giorgia Meloni stomped to victory in the recent general elections, leading some to fear Italy would lurch towards Moscow and become another Hungary. But those fears are overblown. / bne IntelliNews
By Marco Cacciati in Berlin September 29, 2022

Taking 26% of the votes, FDI is the biggest party in Parliament and will take power as part of a right-wing coalition that includes two other parties: the right-wing Eurosceptic “Lega”, led by Matteo Salvini, and the centre-right Christian-democratic party “Forza Italia”, headed by 85-year-old media mogul Silvio Berlusconi.

Overall, the winning coalition obtained a big majority of 44% and a clear mandate to form the new government at a difficult time for Italy; rampant inflation and soaring energy costs will be difficult challenges to overcome in the months ahead.

Meloni is enjoying her success, mostly owing to her party being the only one consistently in opposition in the previous turbulent years. However, her allies have few reasons to celebrate: Forza Italia and Lega won 8.5% of the votes, and the two parties combined came nowhere close to matching FDI’s results. The coalition’s balance will lean strongly in favour of Meloni, who will likely become the country’s next (and first female) Prime Minister, dictating key policies and having the last word over ministers' appointments.

Meloni’s rise to power was widely expected: all the polls predicted a large margin win for the right-wing coalition. But the international press reacted with shock to the news, with CNN going as far as framing Meloni as “Italy’s most far-right prime minister since Mussolini”. Indeed, FDI’s roots lie in the post-fascist MSI (Movimento Sociale Italiano) party, a direct heir of Mussolini’s endeavours, and as recently as last year revelations emerged of FDI representatives still exhibiting public sympathies for fascism.

However, Meloni has rejected these accusations and, according to her party’s programme, her policies are unlikely to set off alarm bells in the near future. Certainly, civil rights don’t seem to be a priority for Meloni, and her willingness to reform the Italian Constitution to introduce a direct presidential election would not leave the country’s democracy in a safer place. Speaking of foreign policy and economy, though, FDI’s programme doesn’t seem to differ much from the current Draghi cabinet’s line.

Meloni will continue to make use of the EU funding coming from the “Economy and resilience plan”, part of the pandemic relief package already secured by Draghi. She will only try to “renegotiate” the conditions coming with the plan. Indeed, it remains to be seen whether the European partners will be willing to take part in these negotiations, what exactly she’ll be asking and what will happen if her requests are rejected.

Meloni, unlike her allies Salvini and Berlusconi, has never openly expressed warm feelings towards the Kremlin, and has always adopted a strong pro-Ukraine stance, even voting with Draghi’s government when it came to sending weapons to the invaded country, despite sitting in the opposition.

On several occasions she vowed a full commitment to the Ukrainian cause, rejecting possible softening of sanctions against Russia, and pledging Italy’s continued allegiance to Nato and the EU.

However, a harsh winter awaits Europe and Italy is set to be one of the worst affected countries in the bloc when it comes to rocketing energy prices.

As previously reported by bne IntelliNews, Italy is the biggest importer of electric power in Europe and is not able to satisfy its energy needs autonomously. Many of the country’s power plants are powered by natural gas and given the block of imports from Russia, they seem unlikely to run at full power again anytime soon.

In spite of Meloni’s public aversion to Draghi’s government, FDI’s agenda seems very much in line with the outgoing cabinet also regarding energy policies.

In a dedicated chapter, her programmes pledge to combat international speculation on energy prices, support a gas price gap at a European level and Italy’s continued commitment to the “RepowerEU” programme in order to wean off the country’s dependence on Russian gas.

Furthermore, it pledges to build new pipelines with North Africa, strengthening the “Mediterranean corridor” and making Italy a “European hub for energy”. It is unclear which pipeline Meloni’s programme is referring to, but it is likely the “TransMed” line – already in service and with expansion plans in place. These measures follow Draghi’s recent agreements with Algeria to boost gas supplies. Renewable energies are only briefly mentioned in general terms, along with a promise to invest in research on new generation NPP.

Nuclear power stations were dismissed in Italy in the late 80s, after the Chernobyl accident, and a more recent referendum in 2011, after Fukushima, ruled out any possibility of new deployments of NPPs.

In recent months, however, some political parties on both sides of the aisle have declared their renewed support for a new-generation NPP, in light of the developments brought by the war in Ukraine and the even more vital need to reduce the country’s energy dependence on imports.

Meloni seems aware of the controversial nature of the topic and takes a prudent stance on NPPs, without clearly committing to any implementation in the near future.

Overall, the fears of those who see Italy going down the dangerous path set by Hungary’s “illiberal democracy” – or even worse, a return of a fascist dictatorship – seem largely unfounded. Italian politicians are notoriously known to talk vigorously during electoral rallies to ramp up popular support, but they rarely follow up on their bizarre proposals when faced with government responsibility. Meloni’s past rants against the EU have to be seen from this perspective, and one should not overestimate her friendship with Viktor Orban, with whom she appears to have little in common besides a common revulsion for “LGBT lobbies” and migrants.

Her sympathies for the Hungarian and Polish leadership could translate into mutual support at a European level, causing some headaches in Brussels. However, there’s little to worry about Meloni’s agenda on the economy and foreign policy.

Given the limited leverage of her more troublesome coalition partners, who scored poorly at the polls, no one should realistically expect shifts in Italy’s current position in the EU and Nato, or any change of heart towards the Kremlin.