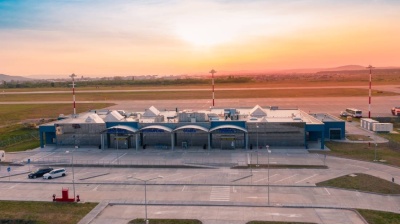 The county of Oradea in western Romania ponders setting up its own airline to boost the activity of its airport, while the local authorities in Iasi, eastern Romania, seek to attract more airlines with the same purpose. On a slightly different scale, the airport of Timisoara is boosting its ambitions as an international airport by building new terminals.

Romania’s biggest airline, Blue Air, will reopen its base in Iasi and will launch flights to big European cities including Paris, Rome and Barcelona, announced Costel Alexe, the head of Iasi City Council.

The airport is operated by the City Council and Alexe says that the airline’s decision is the outcome of the local authorities’ efforts to facilitate the region’s development.

The local authorities will continue to work intensively on the project to expand and modernise the airport infrastructure, he also said.

The airport in Iasi has reached 60% of the traffic it had in July 2019, and the target by the end of the year is to keep the current destinations and increase the frequencies of flights. The director of the Iasi Airport, Vasile Stoicea, estimates that while in July 2019 the traffic had reached 135,000 passengers, in July 2021 only 80,000 passengers were registered.

Disappointed by the weak traffic at Oradea airport in western Romania, the municipality and the county authorities decided to set up their own airline and run frequent flights to the capital city Bucharest as well as the main cities in western Europe.

The two entities have signed an agreement and will seek private partners as well, but the details have not been sketched yet. There is significant demand generated by the foreign companies that operate in the industrial park, Oradea County Council head Ilie Bolojan explained.

The airline may lease small aircraft (74 seats each) and plans four flights per day to Bucharest during the working days and two flights per day on the weekend. The airport is owned by the county council.

“We are a medium-sized city in Romania and the airport serves an area inhabited by about one million people, from Bihor and the limits of the neighbouring counties. We are a city where the operation of Oradea Airport is at the profitability limit, at least until recently, we depend on the commercial policies of the airlines, on the global context. Depending on the air transport market is not a solution for the development of Oradea and Bihor county," said Bolojan.

The international airport of Timisoara, in the western part of Romania, inaugurated a new arrivals terminal for international flights on July 29, which involved RON30mn (€6mn) of investments.

The contract for a new international departures terminal, expected to cost RON185mn (€37mn) has already been signed, Minister of Transport Catalin Drula announced while attending the inauguration.

Belarus’ turn to China
8 hours ago
East and West clash in Bulgaria’s snap general election
20 hours ago
Old faces set to keep ruling Bosnia post-election
1 day ago
Georgia’s border clogged with thousands of Russians fleeing the Kremlin’s mobilisation
1 day ago
Meloni won the elections, but her programme won’t make Italy the next Hungary
1 day ago