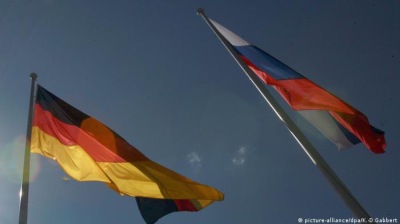 There has been a stampede for the exit among foreign brands working in Russia after the war with Ukraine broke out, but German companies have overwhelmingly decided to stay. / wiki
By bne IntelliNews July 7, 2022

Less than 5% of German companies have decided to leave the Russian market as a result of the war, Macro Advisory reported in a report to clients.

Since Russia’s invasion of Ukraine at the end of February there has been an exodus of foreign-owned brands from Russia, including the icons McDonald's and IKEA. In total over 1,000 companies have publicly announced they are voluntarily curtailing operations in Russia to some degree beyond the bare minimum legally required by international sanctions, according to the Yale school of management that has been monitoring foreign companies working in Russia. However, some companies have continued to operate in Russia undeterred and refuse to leave. German companies have disproportionately ignored the reputational risks and decided to stay.

“At the end of April, the Russian-German Chamber of Commerce conducted a survey among its 1,050 member companies to find out how they see the future of their business in Russia. Of the number of German companies, which make up two-thirds of the total number of members of the WTP, only 4% announced their intention to leave the Russian market completely. The rest plan to continue their activities in the market without any changes, either partially abandoning new projects or changing their structure,” VTP said. German companies are those whose owners are citizens or companies of Germany.

Germany has always been especially keen on Russia and prior to the war had around ten times as many companies registered in Russia as any other EU member state, or some 3,000 companies in total.

The Chamber of Foreign Trade noted that since the beginning of the year it has even taken in 54 new members, while 20 quit the association since February 24.

“However, in the medium and long term, we expect a decrease in the number of member companies in 2023. Nevertheless, we will remain the largest foreign business association in Russia,” VTP added.

Those German companies exiting will take years to return, German executives warn. Executive Director of the Eastern Committee of the German Economy (OAOEV) Michael Harms, in an interview with the German RND, said that the departed German companies will not return to the Russian market in the foreseeable future, noting that many are just starting to leave the market due to legal difficulties. The process could take "months, if not years," he said, as cited by Macro Advisory in a note to clients.

“A quick return to Russia is not expected at all,” he stressed. At the same time, Harms believes that some German companies still left open the possibility of returning, because "if you completely leave the Russian market, then it will be very difficult to return."

Harms described German business losses from leaving Russia as "acceptable" as companies were hit harder by disruption to global supply chains and rising prices caused by the outbreak of hostilities in Ukraine.

The Japanese are even less willing to leave, although they have far fewer companies in Russia than Germany, which is by far the biggest and most active investor from the developed markets.

Less than 3% of Japanese companies operating in Russia are ready to stop their business there, according to the results of an analysis by Teikoku Databank, which was based on the Yale survey.

The analysis shows that a significant number of Japanese companies are cautious about leaving Russia, and many of them have only suspended their activities in the hope of resuming business in the future.

The Yale survey covered about 1.300 large companies around the world and showed that only four out of 168 Japanese companies operating in Russia (2.4%) had decided to stop their activities in the Russian Federation, the Kyodo News service reported.

Fear of nationalisation legislation is persuading some to leave. Russia is working on legislation that would, if approved with the terms previously disclosed, allow the government to appoint local administrators to any business in which a foreign investor has at least a 25% stake, if the state considers that the business is at risk from the actions of the foreign investor, i.e., in the case they are considering leaving Russia. The prospect of that legislation, which would carry onerous penalties, appears to be encouraging some businesses to accelerate their departure.