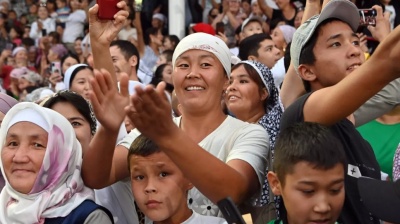 A couple of months back, Kyrgyzstan’s president called a family in the southern city of Kyzyl-Kiya to congratulate them on the birth of their fourth child and suggested a name: Zhakshylyk, meaning good in Kyrgyz.

“So that his birth brings a lot of good to the nation,” Sadyr Japarov told the proud parents.

Zhakshylyk was no ordinary baby. By official calculations, he was the country’s 7 millionth citizen.

Kyrgyzstan has one of the fastest-expanding populations in Asia. The rate of growth is outmatched only by Pakistan, Afghanistan, Tajikistan and Yemen. The National Statistics Committee has said the number of people in the country is expanding at an annual rate of 2.1 percent.

The pace is such that the overall number grew by 1 million over the last seven years alone. For comparison’s sake, it took 13 years, between 2002 and 2015, for the population to grow from 5 to 6 million.

The population bulge is somewhat mitigated by death and outward migration. The country adds 120,000 people to the total tally annually. Experts predict the number will maintain its upward trajectory until 2050.

Is this good news, though?

There are varying opinions across the world about whether having more people is a good thing or not. Some see a challenge in containing or even reducing poverty and environmental harm amid rapid population growth. Others see the ability of developing nations to enlarge the working-age share of their population as key to their prosperity. The latter perspective tends to prevail in Kyrgyzstan.

“If the country can sustain this level of natural growth, then it can hope for a demographic bonus because there will be a large number of economically active people,” Baktybek Kainazarov, a program analyst at the United Nations Population Fund, or UNFPA, told Eurasianet in an interview.

Capitalizing on the growing number of economically active citizens is easier said than done, however. And it is not yet clear that the state has the capacity and resources to harness the demographic dividends its growing young population could generate.

“The more children we have, the more the state must invest in education,” Kainazarov said.

Education expert Yekaterina Kasymova argues that the Kyrgyz government needs to radically redraw the way education is funded to address the problem. Possible solutions should include mandating the funding of schools on a per child basis instead of drawing up arbitrary budgets and introducing a voucher system that would provide families with the money to enroll their children in privately run educational establishments.

“All problems with infrastructure and the overcrowding of schools will be solved then because business will be interested in investing in educational projects,” Kasymova told Eurasianet.

Healthcare is another area in need of major reform and investment.

Bishkek, a city that is now home to more than 1 million people, has only two children’s hospitals. And the capital needs to cater to more than just people who live there since it is common for people seeking treatment to travel to Bishkek from the underserved provinces.

Ismailov says the government needs to develop a preventative model, getting people to submit to regular annual check-ups, to ease pressure on the system.

Family planning in Kyrgyzstan still follows the so-called “stop model”, wherein women give birth immediately after marriage and at short intervals of less than 36 months or so. This has an adverse effect on the health of both children and mothers, experts warn. And being tied up with mothering duties for years often keeps women out of the workplace at a crucial phase of their lives.

According to Kainazarov, at least half of Kyrgyzstan’s women aged between 18 and 30 “give birth and stay at home at an age where they can be most productive economically.”

Kyrgyzstan is a young nation. The average age is 27.9 years. Youths between 14 and 28 years of age account for around 25 percent of the population. The age category below that makes up 34 percent of the total population. Kainazarov says that directing the energy of young people toward growth and development should be treated as a priority.

“We often talk of youth as a strategic resource, so we should act accordingly and empower them, make them feel heard, and engage them in decision-making,” he said.

Labor migration has thus far helped the country to alleviate economic pressures, but experts warn against continuing to rely on this solution.

Economist Aleksander Avdeev forecasts “long-term risks of increased economic and social losses due to the shortfall in deductions and contributions to national funds for social protection and development.”

Kyrgyzstan has never had a dedicated demographic policy. Its social and economic policies have typically existed independently of the demographic situation and forecasts.

That is poised to change.

Since 2021, the Strategic Development and Planning Department, a unit operating under the aegis of the presidential administration, has been crafting a blueprint known as the Concept of Demographic Policy 2040, which is set to see the light of day this month.

The head of the department, Askat Bekov, has said that adopting the concept will “launch the process of preparing strategic documents in the country at a systemic level.”

The plan is to insert a demographic imprint on “economic, educational, reproductive health, family planning, youth, migration, and gender equality policies,” Bekov said at a conference in August 2021.

Optimism is not in short supply. As sociologist Samar Syrgabayev puts it, people in Kyrgyzstan have “an irrational hope of a bright future.” Surveys show that anywhere up to 90 percent of respondents nourish long-term optimism.

What the people running the country need to do is harness those positive sentiments.

“We should look at the fact that we have a lot of young people as an advantage, not only as a challenge,” said Kainazarov.

Nurbek Bekmurzaev is a writer in Bishkek.

COMMENT: The new Cold War will be different, and not only because of China
PANNIER: Uzbeks, Kyrgyz cooperating to level unthinkable 10 years ago
Big freeze that was feared by gas hungry Europe hits Central Asia, Iran

Thousands with homes reduced to rubble left stranded in the open in heavy snowfall and subzero temperatures.

Kazakhstan: Swathes of land confiscated from Nazarbayev’s brother ahead of vote
6 hours ago
Jury still out on the effectiveness of the oil price cap scheme on Russian exports
8 hours ago
Turkey numb with shock as fears grow death toll from two giant earthquakes could climb past 20,000
13 hours ago
IMF issues Russian economic growth outlook that is more optimistic than Bank of Russia's
1 day ago
INTERVIEW: Helen Rodwell, head of CMS’ corporate practice in CEE
2 days ago