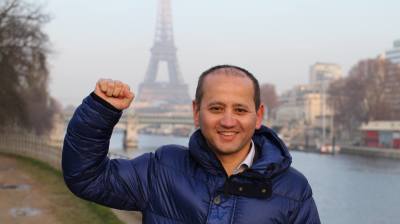 Kazakh fugitive banker Mukhtar Ablyazov was sentenced to life in prison in absentia by a trial that found him guilty of murder charges. / wiki
By bne IntelliNews November 28, 2018

A court in Kazakhstan sentenced Kazakh fugitive banker Mukhtar Ablyazov to life in prison in absentia on November 27 following his conviction for orchestrating the murder of ex-head of BTA Bank Yerlan Tatishev.

Ablyazov is accused of hiring Muratkhan Tokmadi in 2004 to assassinate Tatishev to gain control over the bank. According to the special inter-district court of Jambyl region, businessman Tokmadi shot Tatishev on December 19, 2004. Ablyazov was elected as the chairman on the bank’s board of directors after Tatishev’s death. Tokmadi was sentenced to 10 years in prison earlier this year for the alleged hit job.

An in-absentia trial sentenced Ablyazov on June 7 last year to 20 years in prison for crimes, including the theft of pension assets and savings. An Almaty court convicted him of abusing his office, organising and leading a criminal group, financial mismanagement and embezzlement. Ablyazov, who has denied all the allegations, reportedly described the trial as a farce. According to the charges, Ablyazov stole pension assets and personal savings as well as loans received from foreign financial institutions, causing damages estimated at $7.5bn.

Fled to UK, then France
Ablyazov initially fled Kazakhstan for the UK where he was granted political asylum. After a British court issued an order to arrest him for contempt of court, he then fled to France.

In 2013, Ablyazov was arrested in France after 18 months in hiding. He was released from jail on December 9 last year after the highest French administrative court cancelled an order for his extradition to Russia. That move was made based on Ablyazov’s claims that the whole case against him is politically motivated. An extradition to Russia would mean he would be immediately surrendered to Kazakhstan, Ablyazov has claimed.

While in exile, Ablyazov has been a vocal dissident critic of long-ruling President Nursultan Nazarbayev’s regime. He has alleged that the Kazakh authorities’ accusations are part of a vendetta against him for transgressions against Nazarbayev made by breaking a code of trust between the Kazakh oligarchs. Prior to falling out of favour with Kazakhstan’s regime, Ablyazov briefly led an opposition movement against Nazarbayev in 2002 before re-aligning himself with the regime.

Turning against Nazarbayev once again, this time in Europe, Ablyazov earned himself a number of supporters, including human rights activists and Kazakh dissidents. His allies argue that the supposed diversion of money by Ablyazov, even if it were potentially true, would only show that he played by the rules of the Kazakh oligarchs and that he now poses a threat to the regime due to the insider secrets he gained while partaking in the kleptocracy.