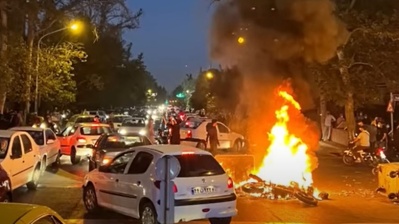 The unrest has come at a time where Iran's president Ebrahim Raisi is due to address the UN general assembly in New York for the first time. / Screenshot.
By bne IntelIiNews September 20, 2022

Demonstrations continued in several cities in Iran for a fifth successive day on September 20 as protesters again vented their fury over the death of Mahsa Amini. The 22-year-old last week fell into a coma and died in hospital after an alleged beating by Tehran’s morality police, who detained her for improperly wearing a hijab head covering.

In a new development, Acting UN High Commissioner for Human Rights Nada al-Nashif said there were reports that police beat Amini with a baton and banged her head against one of their vehicles.

The UN Human Rights Office said it has seen verified videos that show women in Iran being slapped in the face, struck with batons and thrown into police vans by the morality police for wearing the hijab too loosely.

Al-Nashif said: “Mahsa Amini’s tragic death and allegations of torture and ill-treatment must be promptly, impartially and effectively investigated by an independent competent authority.”

Police have denied that the “guidance patrol” in the Iranian capital mistreated Amini, claiming she suffered "sudden heart failure", but relatives of Amini, an ethnic Kurd from Kurdistan province in western Iran, said she was fit and healthy with no history of such medical problems.

As September 20 progressed, it was again clear that the authorities were throttling internet speeds in an effort at disrupting protesters’ attempts to spread the word about protest sites and actions.

Iranian President Ebrahim Raisi, currently in New York to address the UN general assembly for the first time, ordered an investigation into Amini’s death and expressed his personal sympathy, but in the past year he has come under fire for backing a more interventionist use of the morality police on the streets of Iran.

An aide to the country’s supreme leader, Ayatollah Ali Khamenei, paid a two-hour visit to Amini’s family home on September 20. The semi-official Tasnim News Agency reported that Abdolreza Pourzahabi told Amini’s family “all institutions will take action to defend the rights that were violated” and that he was sure Khamenei was “also affected and pained” by her death.

Among the protests was a demonstration in Sari, north of Tehran, where large crowds cheered as women set their hijabs alight in defiant acts of protest, BBC Persian reported.

The news service also said that three male protesters were killed during protests on September 19 after security forces opened fire.

Hengaw, a Norway-based organisation that monitors human rights in predominantly Kurdish areas, added that 38 people were injured across the weekend when riot police fired live ammunition, rubber bullets and tear gas at protests in Saqez and Sanandaj, the capital of Kurdistan province. It said one of the three male protesters who were killed in clashes with security forces was shot in Saqez, while the two others were shot in the towns of Divandarreh and Dehgolan. A 10-year-old girl was wounded in a clash with police in the town of Bukan but was alive, Hengaw added.

Tehran Governor Mohsen Mansouri tweeted on September 20: “The main elements of the initial core of the gatherings in Tehran tonight were fully organised, trained and planned to create disturbances in Tehran.

“Burning the flag, pouring diesel on the roads, throwing stones, attacking the police, setting fire to the engine and garbage cans, destroying public property, etcetera … are not the work of ordinary people.”

Local petitions appeared calling for the disbandment of the morality police.

Some Iranian MPs alleged outsiders, including news organisations backed by Iran’s enemies in Saudi Arabia, were exploiting the death of Amini.

Polish proposed ban on Russian rubber may give the European tyre industry a flat
7 hours ago
Prague to have a new municipal government after record-long negotiations
12 hours ago
Party congresses of Hungarian opposition demonstrate deep divisions
12 hours ago
At least 500 dead after huge earthquake hits Turkey, Syria in early hours
12 hours ago
Turkish minister tells US ambassador ‘Take your dirty hands off Turkey’ as sanctions sparks fly
17 hours ago