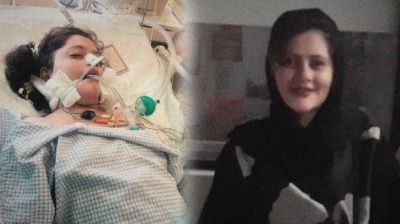 Mahsa Amini fell into a coma while in police custody. / Combo photo of Twitter posts.
By bne IntelIiNews September 16, 2022

Many mourners on September 17 chanted “Death to the dictator” as 22-year-old Iranian woman Mahsa Amini—who died the previous day after allegedly being beaten by Tehran morality police for not complying with hijab rules—was laid to rest.

The chanting featured in amateur videos posted online of the funeral attended by hundreds in Amini’s hometown of Saghez, in Iran’s Kurdistan province. Footage also showed women taking off their headscarves in a gesture of protest at the funeral. A photograph of Amini's gravestone was published on social media. It reads: "You didn't die. Your name will be a code [rallying call]."

Reports suggested some mourners marched to the local governor’s office to demonstrate against the death of Amini, who was taken to hospital where she was declared brain-dead by doctors following her arrest on September 13. According to videos received and verified by the BBC Persian Service, the security forces opened fire on the protesters. Network connectivity readings taken by watchdog Netblocks, meanwhile, indicated the authorities were throttling the internet in and around Saghez and in other localities including Tehran in an effort at preventing protests over Amini’s death spreading.

Social media reports posted between the time of the arrest of Amini and her death recounted how eyewitnesses told journalists that Amini appeared to suffer a beating inside a morality police, or “Gasht e-Ershad”, van, though they described her as conscious after it took place.

Amini was said to have travelled from western Kurdistan province to the Iranian capital to meet relatives when she was arrested. A few hours after her arrest, her family was informed that she had been hospitalised.

There were some reports of street protests after Amini passed away. Authorities launched probes into her death following a demand by President Ebrahim Raisi, state media reported. Reuters reported that, among critical social media comments, outspoken reformist politician Mahmoud Sadeghi called on Supreme Leader Ayatollah Ali Khamenei to speak out about the case as he had denounced the killing of George Floyd by US police in 2020.

Tehran Police Department’s media centre denied the eyewitness claims that Amini was beaten, stating that she was transferred to a Tehran police department for "justification and education" about the hijab when she "suddenly suffered a heart problem", Radio Farda reported on September 15.

Kiarash Amini, Mahsa's brother, said in an interview with the Iranwire news website conducted prior to the announced death that doctors told him they had diagnosed his sister as having had either a heart attack or a stroke, and had added that " while her heart was still beating, her brain is no longer conscious."

Under the hardline government that took power in Iran last August following the disqualification of key non-hardline candidates that intended to run for president, there has been an increasing crackdown on women seen as violating mandatory rules on wearing the hijab in public. In recent weeks, women seen as not in compliance with the rules have been barred from entering government offices, banks and public transport buses and metro.

The hijab head covering worn by Muslim women was made compulsory in public for Iranian women and girls over the age of nine following Iran’s 1979 Islamic Revolution. Many in Iranian society, both religious and non-religious, have persistently complained that to harass women over the wearing of the hijab is not in line with Iranian culture.

Lately, the head of Iran's judiciary, Gholamhossein Mohseni-Ejeie, suggested that foreign powers were behind a campaign against the compulsory wearing of the hijab. He instructed intelligence agencies to find the "hands behind the naked veil".