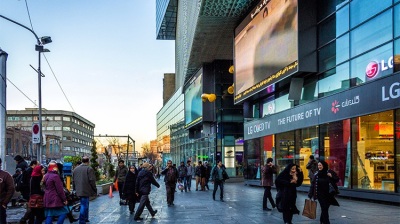 Hafez underpass with its three mobile centres is the home of mobile phone sales in Iran.
By bne IntelliNews February 13, 2018

Iran’s deputy minister of Communications and Information Technology announced that all smuggled phones not officially registered with the Communications Regulatory Authority (CRA) would be disconnected by the Persian New Year (March 21) with no exceptions, according to Iran Labour News Agency on February 12.

Hossein Fallah Joshaghani, the deputy minister and Director of the CRA, announced an initial testing phase of several non-represented brands starting on December 5, including Google, Blackberry and Apple which were barred from the three leading carriers MTN-Irancell, Mobile Communications of Iran (MCI), and Rightel.

The head said the there were no faults in the free registry scheme and the deactivation of mobiles not logged on the official list by the December 5 cut-off will ultimately make the smuggled phones become redundant and worthless to the owners.

Asian cellphone giants in for hit

Joshaghani said all brands including famous Chinese and Korean names like Samsung and Huawei would be added to the list in the next month. Those two brands constitute the most significant share of Android smartphones distributed in the country, holding a 53% and 32% share of the market or 17.8mn and 11.2mn users respectively.

However, Samsung may face stricter penalties following a faux pas by PyeongChang Winter Olympic officials last week, who initially refused to give Iranian Olympians a limited edition $1,000 Galaxy S8 handset, due to ongoing US sanctions against the country.

That mistake, in turn, caused social media users across Iran and the Rouhani Administration to demand an official apology by Samsung as well as summoning the South Korean Ambassador to the foreign ministry to request an official explanation.

Travellers in for a hit

Joshaghani intimated that people visiting Iran would have a grace period of a month before having to register their phones officially.

Iran is also set to charge Iranian nationals returning to the country with phones purchased abroad with an 18% levy at airports. The phones must also be registered with customs and the CRA.

He said, “If I were afraid that the scheme would fail, I would have never pushed ahead with it as a I have.”

The official noted, “The important thing about systems such as the mobile registry is the possibility of stopping unforeseen problems, and we have a professional third-party contractor who will fix problems.”

Director of the Tehran Telecoms Union, Mehdi Mohebi, who is backing the move, said: “All newly activated Google, BlackBerry and Motorola phones have been screened since December 5, with smuggled handsets going offline next week.”

December last year saw some 25,000 smuggled Apple iPhones disconnected from Iran’s three mobile networks, the union official added. However, reports from traders suggested that older iPhones 5s had somehow slipped under the radar. Apple currently has an 11% share of the Iranian smartphone market, with some 6mn Iranians owning the banned brand.

The third phase of the mobile blocking scheme will target more popular brands, namely LG, Samsung and Huawei. Together, they account for more than 80% of local mobile device sales.