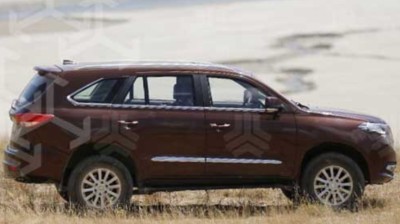 The announcement of the first “Iranian crossover” car came after SAIPA finally halted production of its much-maligned Pride which first entered production in the early 1990s and was based on the design of the Kia Pride which it took its name from.

Javad Soleimani, SAIPA’s CEO, announced the SUV without revealing details of the car or even close-up pictures of the vehicle.

"This product will be the first localised SUV in the country and features two differentials and an independent chassis, which gives this car considerable capability, power and quality," he said.

Social media immediately questioned the origins of the SUV which has appeared out of thin air, with some suggesting it may be a rebadged Chinese vehicle.

Iranian automakers have a long history of working with Chinese car manufacturers.

Soleimani noted that along with the Offroady, other cars from the firm’s localised SP-100 platform would be brought on to the market.

Nagorno-Karabakh ceasefire brokered by US frays after minutes

It took just minutes for the third attempt at a humanitarian ceasefire in the Nagorno-Karabakh conflict to fray on October 26, with Armenia and Azerbaijan accusing each other of violating the truce ... more