Giorgi Kadagidze is used to navigating stormy seas. When he was appointed head of the central bank in February 2009, the Georgian economy was still reeling after the double-whammy of the conflict with Russia over the breakaway region of South Ossetia in August 2008 and the global financial crisis that started the following month. Tough decisions were required, and despite critics stating that at 28 he was too young and inexperienced to chart an independent course as governor of the National Bank of Georgia, Kadagidze responded with radical measures.

Six years on, Georgia’s banking system is considered one of the strongest and most stable in the post-Soviet space, and much is owed to the youthful governor’s fierce determination to bring the country’s financial system in line with the world’s most developed. To those who know him, it was no surprise that he was named central bank governor of the year for Europe in 2010 and 2015 by The Banker. “We’ve come a long way, doing a tremendous job in reforming an ordinary post-Soviet failed country,” Kadagidze tells bne IntelliNews in an interview. “But we need further reforms, which I call secondary reforms, to support the country’s competitiveness. We cannot afford [to relax], as Georgia is [still] one of the poorest countries in Europe.”

Despite the headwinds, the economy grew at an average of 5.7% a year between 2010 and 2013, and the country ranked highly by other major economic measures – ease of doing business, reforms and investment climate. But clouds are once more gathering on the horizon and, Kadagidze warns, “we are heading towards very difficult times.”

The deepening economic crisis in Russia and Ukraine is hitting the country’s exports, remittances from migrants and tourism. Last year the economy grew by 4.7%, short of the 5.0% prediction, and for 2015 the government has cut its forecast from 5% to 2%.

The instability is also keeping a lid on investment. In 2014 foreign investment increased by 35% to $1.27bn, marking the highest inflow since the depths of the crisis in 2008, though Kadagidze notes this is still “not enough to support growth.”

In June, Georgia signaled to Russia where its future lies by signing a free trade and association deal with the EU, which will grant Georgian products and services access to Europe's 500mn-strong market. However, Kadagidze warns that this by itself will not be enough. “The deal [with the EU] is a huge plus, but it doesn’t lead to immediate flow in investment,” he says. “Let me put it bluntly: if we have the same tax burden and bureaucracy as eastern European Nato members, why would investors come here given that there is a much more political instability in that region?”

The crisis in Ukraine and Russia is also proving a currency headache for the NBG. Georgia marked the end of 2014 with a sharp weakening of its currency against the dollar; between November and March the lari lost 29% of its value against the dollar, falling to GEL2.22 to the dollar from GEL1.7 in early November.

Kadagidze opted for safeguarding the NBG’s reserves rather than use them up fighting to maintain the lari’s value. “Experience [in other countries] shows that any central bank going against market fundamentals is not going to end well,” he explains. “Spending reserves to cover up the fundamental shortages will not help at all – it would only postpone the problem.”

The central bank has had a few targeted foreign exchange auctions, but with a policy of inflation targeting it intervenes only in cases where depreciation starts affecting prices. The NBG’s currency reserves were $2.469bn at the end of February, slightly down from $2.699bn as of December 31.

The International Monetary Fund (IMF) stated that it “fully” supports the NBG stance to refrain from intervening and allow the lari to float. “We’re intervening only to prevent large [daily] fluctuations, which would create more uncertainty, so we try to smooth that down. But in no way are we trying to guide the exchange rate in one direction or another – that’s just not possible.”

Not everyone agrees. In February, former prime minister, Bidzina Ivanishvili, Georgia’s richest citizen and widely believed to be the “grey cardinal” calling the shots in the government, accused the central bank chief of “inaction and wrong actions”. But Kadagidze, the last remaining high-ranking official appointed by the former government led by ex-president Mikheil Saakashvili, who some think is being made a political scapegoat for the lari’s weakness, counters that his stance is not an isolated one. “All our counterparts in [international financial institutions] are on our same page,” he stresses.

From his top office of the towering steel petals-like building that is the central bank headquarters, Kadagidze enjoys wide views over the capital Tbilisi and its centres of power – from the presidential palace to Ivanishvili’s $5mn steel-and-glass mansion. “Internally there is a lot of undeserved criticism, but that will not make us change course. Our government paper trades at good yields, banks are healthy and portfolio investors are ready to invest, and we are we not witnessing capital flight, as in many emerging markets,” he points out. “Investors trust the prudence of our monetary policy and our banking supervision – there’s no way we can give that up.”

The banking system indeed looks in fine fettle, esepcially compared to those in surrounding countries. The central bank remains one of the most conservative in the former Soviet space, demanding stringent levels of capital and liquidity, and maintaining close supervision. “We have a very prudent banking system, our banks have enough capital buffers to absorb shocks, we are in a very strong position,” he states, adding proudly that no bank has needed to be bailed out.

Prudence is also behind the NBG decision, announced last October, for commercial banks to spin off their non-core banking businesses by December 2015, claiming that “the practice creates a conflict of interest”.

The previous liberal policy of Georgia’s central bank had allowed banks to wade into real estate and healthcare as part of a strategy to overcome the 2008 financial crisis, but as the sector is now on a strong footing, the time has come for prudence over profits. “It is a preventive measure,” explains Kadagidze. “Banking-holding investors are more than welcome in any field of the Georgian economy, but we say but let’s not do it through the banking balance sheets, let’s keep those nice and clean for banking and do the rest though different means.”

Over the years, the central bank has supported the development of local capital markets. As high dollarization remains “one of [Georgia’s] biggest macroeconomic challenges”, since 2010 the NGB has pushed for a “larisation” of the financial sector. The result is that now more than half of all individual loans are in the national currency. In 2014, the EBRD issued the first lari-denominated bond worth €20.7m and in 2015 the International Finance Corporation (IFC) and the Asian Development Bank (ADB) followed suit. The issuance of local currency bonds by international financial institutions will further support the supply of long-term lari resources on the market and the de-dollarisation process in general, Kadagidze argues.

Still, Georgia’s capital market is embryonic and banking remains concentrated in the hands of just two banks – bank of Georgia and TBC Bank, which are both listed on the London Stock Exchange. “It comes only with the development of the country, you cannot have a low-income country with developed capital markets, there’s not enough liquidity,” says Kadagidze. “It is a work in progress. We developed the forex market, then government and central bank local paper, then last year the corporate bond market. The EBRD made a pioneering move, and we followed by cleaning up all the regulations around it. Once that market is consolidated, we will be approaching equities. But you cannot skip [stages]. We could buy up-to-date software from LSE, Nasdaq and put everything up, but it’d be empty if there are no buyers and sellers... Things don’t work that way.”

By the time these reforms start bearing fruit, Kadagidze will not be overseeing Georgia’s financial system, as his mandate expires in February 2016. “I’ll make up my mind in summer about the future,” he says, “but I’d like to work in education.” 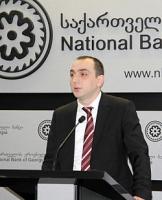