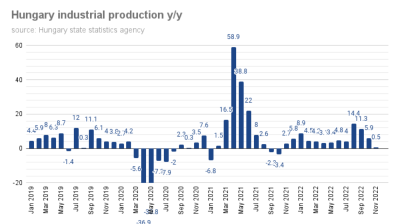 Hungarian industrial output slowed markedly in Q4, adding to concerns about a more significant slowdown in the economy. / bne IntelliNews
By Tamas Csonka in Budapest January 10, 2023
Hungary’s industrial output increased by 0.5% y/y in November, (chart) slowing from 5.9% in the previous month, the Central Statistics Office said in a preliminary reading on January 9. Output rose a working-day adjusted 0.8%, at the slowest pace since October 2021.

The monthly data showed a contraction, falling for the second straight month, a fall of 0.7% after a 3.6% decline in October.

Detailed figures will be released later this week, but KSH said output of the automotive industry, Hungary's biggest manufacturing branch, "grew significantly", while output of "most" other branches, including the computer, electronics and optical equipment segment and the food, drinks and tobacco products segment fell.

Hungary’s industry remained resilient until September with strong export growth, but output slowed markedly in Q4, adding to concerns about a more significant slowdown in the economy.

The slump in the last two months of the year could be related to companies adjusting to rising energy costs and weaker external demands, analysts observed. The short-term outlook is therefore not very favourable, but in the medium term, significant capacity expansions coming on stream, notably in the automotive, chemicals and EV battery sectors, could lead to a meaningful rebound in manufacturing output, Erste Bank analyst Orsolya Nyeste said.

The outlook for Hungary’s export-oriented industry will depend mainly on the recovery of the global economy and the European response to the energy crisis, she added

The EUR/HUF slipped 0.6% to 396 on concern that the slowdown could increase the risk of a deeper recession in Q4. The preliminary GDP data for the last quarter and 2022 will be released on February 14.

Russia’s industrial output in 2022 declined by 0.6% year on year in 2022, according to the latest data from state statistics agency RosStat, thanks to heavy spending by the state to put Russia's economy onto a war footing.

The Russian budget started January in its deepest deficit in years, according to the result released by the Ministry of Finance on January 6.