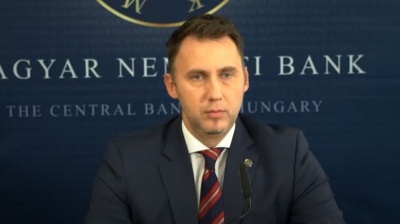 The Hungarian National Bank (MNB) will maintain a tight monetary policy with high interest rates until the country's risk perception improves significantly, which will ensure that inflation expectations moderate, deputy-governor Barnabas Virag said after policymakers left the base rate unchanged at 13% at the monthly rate-setting meeting on October 25. Policymakers left the interest rate corridor unchanged.

The MNB’s decision was in line with forecasts. The central bank's priority is to ensure price and market stability and it will use all instruments introduced in mid-October for as long as warranted, according to Virag.

Policymakers launched a one-day deposit facility at an 18% interest rate, which has become the reference lending rate over the base rate, and introduced an overnight Fx liquidity swap facility in mid-October at an extraordinary meeting. The 5pp daily hike was the largest ever one-day monetary tightening.

Policymakers also announced they would cover foreign currency liquidity needs for energy imports until the end of the year from the reserves.

The measures were introduced just two weeks after the September rate decision when the MNB ended its tightening cycle with a 125bp rate hike. As inflation pressures remained strong, the announcement came as a clear invitation for investors to boost their short positions betting against the forint, analysts said.

The Hungarian currency weakened more than 5% in the first two weeks of October and hit consecutive records. Since then it recouped its losses as the 18% interest rate is lending  ample support, yet the forint remains one of the worst-performing emerging market currencies this year, losing 10% of its value against the euro and 27% versus the dollar.

According to Virag’s assessment, the current account deficit has reached its peak and the external balance is improving faster than expected thanks to the steep decline in gas and commodity prices and the fall in demand.

Gas usage in August fell 10% y/y as Hungarian households now have to pay 7 times the regulated price for consumption over the threshold linked to the national average. Lower demand and declining gas prices mean that MNB will need to provide less foreign currency liquidity than earlier expected, economists added.

The MNB estimates that with energy prices treading lower, Hungary’s net energy imports would come to around €1bn, down from €1.5bn in earlier months.

The current account balance deteriorated rapidly in the previous months due to the spike in gas prices, putting further pressure on the local currency.

The October headline CPI could surprise to the upside, driven by volatile food prices, but lower global commodity prices and the slowdown in domestic demand are pointing to a slowdown in inflation, according to Virag.

Headline and core inflation topped 20% in September, a 26-year-high, and analysts are now forecasting a peak of around 25% in early 2023.

Analysts queried by state news agency MTI said the rate decision was in line with projections and that the central bank will be holding on to liquidity tightening measures in place until 2023.

The narrowing of the C/A deficit, as energy prices ease, could help the forint gain ground and ease inflationary pressures, Makronom Insitute said.

The MNB remains the most hawkish central bank in the region, which is essential for financial stability as well as for inflation targeting. Tight monetary conditions will remain in place with measures announced to reduce liquidity, according to the forecast.

Magyar Bankholding sees the MNB’s overnight deposit facility rate to be level with the base rate in the first trimester of 2023 to be phased out later in 2023. Inflation is set to moderate from early next year on the back of the recent steep decline in energy prices and the high base. The bank expects the MNB to start reducing the base rate from mid-2023, which could fall to 9% by end of 2023,

Price pressures will remain strong for the rest of 2022  and inflation is likely to average 13-14% this year, according to Equilor Investment.