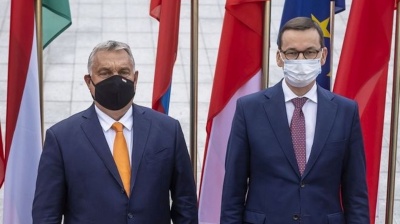 Hungarian Prime Minister Viktor Orban and his Polish counterpart, Mateusz Morawiecki stood firm in rejecting efforts to tie spending to rule of law issues and agreed to only accept an EU budget deal that benefits both of them at a joint press conference in Budapest, further escalating tensions with EU other member states.

Right-wing leaders of Hungary and Poland met in the Hungarian capital to coordinate their strategy after they blocked the €1.8 trillion budget and coronavirus recovery package last week.

The two prime ministers said in a joint statement that plans to tie European Union funding to rule of law criteria could be used as political pressure, which could theaten the EU’s future.

Morawiecki said there was a danger that the European Union’s "rule-of-law mechanism, motivated by completely new, arbitrary political decisions" could lead to the bloc’s disintegration.

The mechanism would be "extremely dangerous" for the EU as a whole, he said, arguing that legislation must not contravene the EU treaties.

Morawiecki noted the veto was written into the EU treaties as a way of safeguarding the interests of member states.

Orban also stood by his decision to veto, a legitimate tool guaranteed by the bloc’s founding treaty, he added.

Hungary's conservative leader said that Hungary will not accept any proposal that Poland deems unacceptable.

But some European leaders insist that the rule of law mechanism is non-negotiable. On Wednesday, European Commission President Ursula von der Leyen told the two countries that they should go to the EU's top court instead of blocking the deal.

The rule of law provisions only apply to cases that threaten the EU budget, she said, adding, "It is very difficult to imagine anybody in Europe who would possibly have anything against that principle."

Orban's decision to veto the economic package was also met with resistance in the European People's Party (EPP), the European conservative political family of which his Fidesz party is a suspended member.

Manfred Weber, the leader of the EPP, called Poland and Hungary's veto "irresponsible", and denied claims that the rule of law mechanism would be used as a tool of political pressure.

The Polish and Hungarian prime ministers proposed a two-track solution to exit the impasse. It includes limiting the scope of any additional budgetary conditionality to the protection of the financial interests of the union in accordance with the July conclusions of the European Council.

The second would be to put the issue of linking payouts to the rule of law issues to the European Council for approval, which would ultimately lead to modification of EU treaties.

Hungary and Poland are the two largest net beneficiaries of EU cohesion funds, hence are set to lose big if there is no agreement.

The EU could enter next year with only a provisional budget that would be severely diminished in comparison to the proposal just blocked by Warsaw and Budapest.

In that case, Warsaw and Budapest could face losing billions of euros in EU funding over the next seven years, weakening growth, stalling infrastructural developments or – especially in Poland case – hindering the transition to a low-carbon economy.

Hungarian media wrote that in the short term there is no risk to the country's finances. At the end of October, the value of government deposits at the central bank was at a record high of HUF2.9 trillion.

Hungary has just tapped international markets with a €2.5bn FX bond issue, which strangely came days before the veto was announced. Analysts pointed out that borrowing costs would not have been as favourable had Hungary done that after taking the controversial step.

The combined value of the government deposits and the latest bond issue is around HUF3.8 trillion, equalling the budget shortfall expected for this year, or 9% of the GDP.

Hungary is slated to receive a further €300mn in EU funding this year in addition to the €3.3bn already transferred by Brussels.