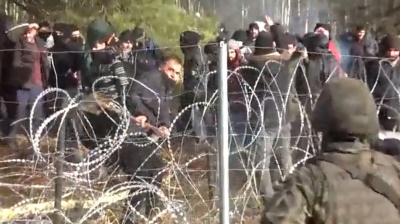 Belarus has been flying migrants in from the Middle East and bussing them to the Polish and Lithuania borders in recent months to cause a migrant crisis. In November, Minsk organised the biggest clash yet with hundreds of migrants all arriving at the border at once. / Polish defence ministry
By bne IntelIiNews November 8, 2021

Hundreds of migrants on November 8 stormed Poland's border with Belarus where they confronted Polish guards in the biggest such clash yet, orchestrated by the Lukashenko regime to punish the EU for sanctions imposed on Belarus.

Social media posts showed several hundred migrants making their way to the Polish border and then trying to break down barbed wire fences in an effort to cross into Poland.

Aware of the approaching migrants, Poland stationed additional border guards and police on the line. In total more than 12,000 Polish troops were stationed at the border, many times more than usual, according to the Polish defence minister. At the same time the defence ministry sent drones with cameras into the air along the border to track the movement of various groups of migrants clustered on the Belarusian side.

Belarusian observers suspected something was up on the same morning where thousands of immigrants that have been flown into Minsk from Syria and Iraq by Belarus' President Alexander Lukashenko’s government suddenly disappeared. The Belarusian has been organising charter flights from the Middle East in recent months and then busing the migrants to the border where they attempt to enter the EU illegally.

Few of the migrants have much money and have been buying cheap sleeping bags from department stores in Minsk and camping out on the streets. However, social media posts from Minsk on the morning of November 8 showed empty streets and all the migrants were gone.

They resurfaced later the same day as hundreds walked towards the Polish border with some trying to scale the barbed wire fences that have been hastily erected on the border by Polish guards during the last month to prevent illegal crossing. Other migrants used spades and other tools to try to knock the fence down.

Aware of the imminent attempt to breach the border, Warsaw sent hundreds of addition police to help patrol the border and repulse the would-be refugees.

Neighbouring Lithuania also beefed up security as the majority of migrants have tried to cross into its territory along its long border with Belarus. The government in Vilnius said it might introduce a state of emergency on its border with Belarus if the situation deteriorated, reports Reuters.

Brussels has accused Minsk of encouraging migrants from the Middle East and Africa to cross into the EU via Belarus, as a form of a “hybrid warfare” after the EU imposed several rounds of harsh sanctions on the Lukashenko.

The first round were imposed last year after Belarusian police brutally attempted to crush mass protests that broke out within hours of the polls closing after presidential elections on August 9 saw Lukashenko swept to a landslide victory in an election widely seen as falsified.

But tensions reached a crescendo when Lukashenko forced a commercial Ryanair flight to land in Minsk and arrested top opposition blogger Roman Protasevich and his girlfriend on May 23. The plane was en route to Vilnius from Athens but was forced to land in Minsk by a Belarusian MiG fighter after it briefly crossed into Belarusian airspace. Europe was incensed by what it called an act of piracy. Another round of even harsher sanctions was imposed by the US and EU that targeted Belarus’s main raw materials exports, amongst other things.

The Polish authorities said that no migrants had managed to cross the border into its territory on November 8. The crowd at the border was the biggest to date. Previous Minsk police have been caught on camera escorting small groups to quiet sections of the border and then preventing them from returning. One migrant, caught in no man's land between the two opposing groups of guards, died last month.

In an earlier video, shared by the Belarusian Telegram channel NEXTA, migrants carrying rucksacks and wearing winter clothing were seen walking on the side of a highway. Other videos showed large groups of migrants sitting by the road and being escorted by armed men dressed in khaki.

"Belarus wants to cause a major incident, preferably with shots fired and casualties. According to media reports, they are preparing a major provocation near Kuznica Bialostocka, that there will be an attempt at a mass border crossing," Deputy Foreign Minister Piotr Wawrzyk told Polish public radio as cited by Reuters.

Lithuania said it also was moving additional troops to its longer border with Belarus to prepare for a possible surge in migrant crossings. Latvia said the situation was "alarming".

The Belarusian state has denied manufacturing the crisis, but the state border committee confirmed on November 8 that many refugees were moving towards the Polish border. However, Minsk said Warsaw was taking an "inhumane attitude" in its treatment of the migrants.

"They throw tree trunks on the fence so as to reduce the height of this fence to breach it," said Katarzyna Zdanowicz, spokeswoman for Polish border guards in the area as cited by Reuters.

Lukashenko has defied opposition calls to resign and his regime has been propped up by the Kremlin. Lukashenko came close to being ousted in the first month following the disputed elections in August last year until Russian President Vladimir Putin publically said that he would extend Lukashenko military aid “if necessary”, which turned the tide.

Charities say the migrants face freezing weather conditions and a lack of food and medical attention as winter is closing in and temperatures fall to close to zero at night.

Poland said seven migrants had been found dead on its side of the border, with reports of more deaths in Belarus.

Humanitarian groups accuse Poland's ruling nationalists of violating the international right to asylum by pushing migrants back into Belarus instead of accepting their applications for protection. Poland says its actions are legal.

Poland's Prime Minister Mateusz Morawiecki said on Facebook: "The Polish border is not just a line on a map. The border is sacred – Polish blood has been spilled for it!".