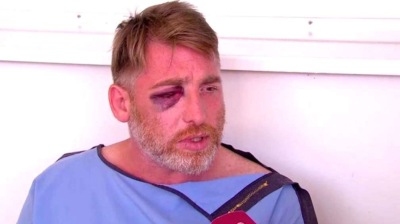 A cameraman in Georgia's capital of Tbilisi died on July 11 after being severely beaten by right-wing mobs protesting the planned Tbilisi Pride march a week before. / wiki
By Neil Hauer in Yerevan July 13, 2021

A cameraman in Georgia's capital of Tbilisi died on July 11 after being severely beaten by right-wing mobs protesting the planned Tbilisi Pride march a week before.

Alexander Lashkarava, a 37-year-old cameraman working for the independent station TV Pirveli, was found dead in his bed in the early hours on Sunday, the channel reported.

Last Monday he was assaulted by a violent mob of anti-LGBTQ protesters and sustained fractures to his facial bones.

More than 50 journalists were attacked that day by anti-LGBTQ groups protesting against the planned Pride march in Tbilisi, which was cancelled due to safety fears.

It accused authorities of “culpable passivity” and said police had failed to protect journalists.

Georgia’s interior ministry said in a brief statement on Sunday that an investigation had been opened into Lashkarava’s death.

Rights activists announced a protest rally later on Sunday to demand the resignation of the prime minister, Irakli Garibashvili.

In an extraordinary scene police arrived at Lashkarava’s house and forcibly removed his body, which was taken to a morgue for an autopsy. Doctors later pronounced the cause of death as a drugs overdose, prompting claims of the cover up by the state.

The family protested and called for an independent autopsy to be performed. The state has been accused of being complicit in provoking the violence and heavy handed their response.

Georgia aspires to move closer to Europe and has espoused liberal western values, however, on the issue of homosexuality it has struggled to put deep rooted traditional prejudices aside. A recent survey found that 96% of Georgians were against same sex marriages, more than Russia’s 86%. The attempts to hold Pride marches provoke a violent reaction by the church and conservative Georgians every year that often ends in violence.

“The government not only encourages violence against journalists, it is part of the violence,” Nodar Meladze, TV Pirveli’s news editor, told AFP.

Garibashvili has faced strong criticism from the opposition and rights activists after he spoke out against holding the Pride march, describing it as “unacceptable for a large segment of Georgian society”.