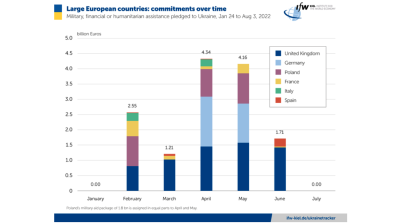 For the first time since the war started, Ukraine's Western friends have failed to commit any new aid in July, which experts say will stymie its attempts to maintain a counteroffensive. / bne IntelliNews
By Ben Aris in Berlin August 18, 2022

The flow of new international support for Ukraine “dried up” completely in July, according to the Kiel Institute for the World Economy, which has been tracking donations. There were no new promises of any sort of aid from any of the large EU members like Germany, France or Italy, the institute said in its latest release on August 18.

“The newest update of the Ukraine Support Tracker (July 2 to August 3) shows that in July, Ukraine received only around €1.5bn in new pledges of support. In total, the tracker now records commitments of €84.2 billion,” said Christoph Trebesch, head of the team that compiles the Ukraine Support Tracker. “In July, donor countries initiated almost no new aid, but they did deliver some of the already committed support such as weapon systems.”

Germany, for example, has not announced any further military support, although it did send considerable military aid that was committed earlier.

This is the first month since the war started just over six months ago that Ukraine has received no new pledges of help, either military or financial.

After Russia destroyed all of Ukraine’s munition production factories as well as a lot of critical supporting infrastructure in the early days of the war, Ukraine has become completely reliant on the West for supplies.

So far it has received a total of €84.2bn in aid of all types, including financial, between mid-January and early August. Of that aid, a recent report says Ukraine has received a total $12.7bn of financial aid to support budget spending and the US has recently promised another $4.5bn as Ukraine is running out of money. The EU says it will match with another €9bn in financial support, of which €1bn has already been dispersed.

The lack of money and new munitions will impede Kyiv’s effort to mount a counteroffensive, especially the current operation to retake control of Kherson, north of the Crimea, where a fierce battle is raging. Russia has reinforced the strategic city, the only city Russia holds west of the Dnieper river, with troops from the Donbas.

There are some 20-30 BTGs in Kherson, according to reports, whereas Russia took Mariupol with only 11 BTGs in June. Kyiv has reported that it has taken over 1,000 villages surrounding the city, but after more than a month of campaigning it has not made any progress with retaking the city itself.

Kyiv is entirely dependent on Western supplies but is quickly burning through what it has been given. The US recently supplied Kyiv with a new batch of rockets for its devastating US M142 High Mobility Artillery Rocket Systems (HIMARS) that was intended to last a month, but was used up in only three days, according to reports.

“Dwindling support increases the likelihood of a stalemate or of further Russian advances,” Trebesch said on Twitter, as cited by the Moscow Times.

The failure to pledge more support for Ukraine means the gap between promised money and funds actually disbursed has narrowed, according to KIWE. (chart)

The United States remains far ahead of Ukraine’s other donors, having sent more than €40bn in assistance between mid-January and early August, according to the tracker. EU member states have collectively pledged less than €30bn and other countries like Canada another €10bn at the same time. (chart)

The US leads in military aid, having sent €2.06bn of weapons delivered from a total of €8.63bn promised. Poland and the United Kingdom are the only other two countries to have pledged or delivered more than €1bn of weapons or finance for future arms purchases. (chart) 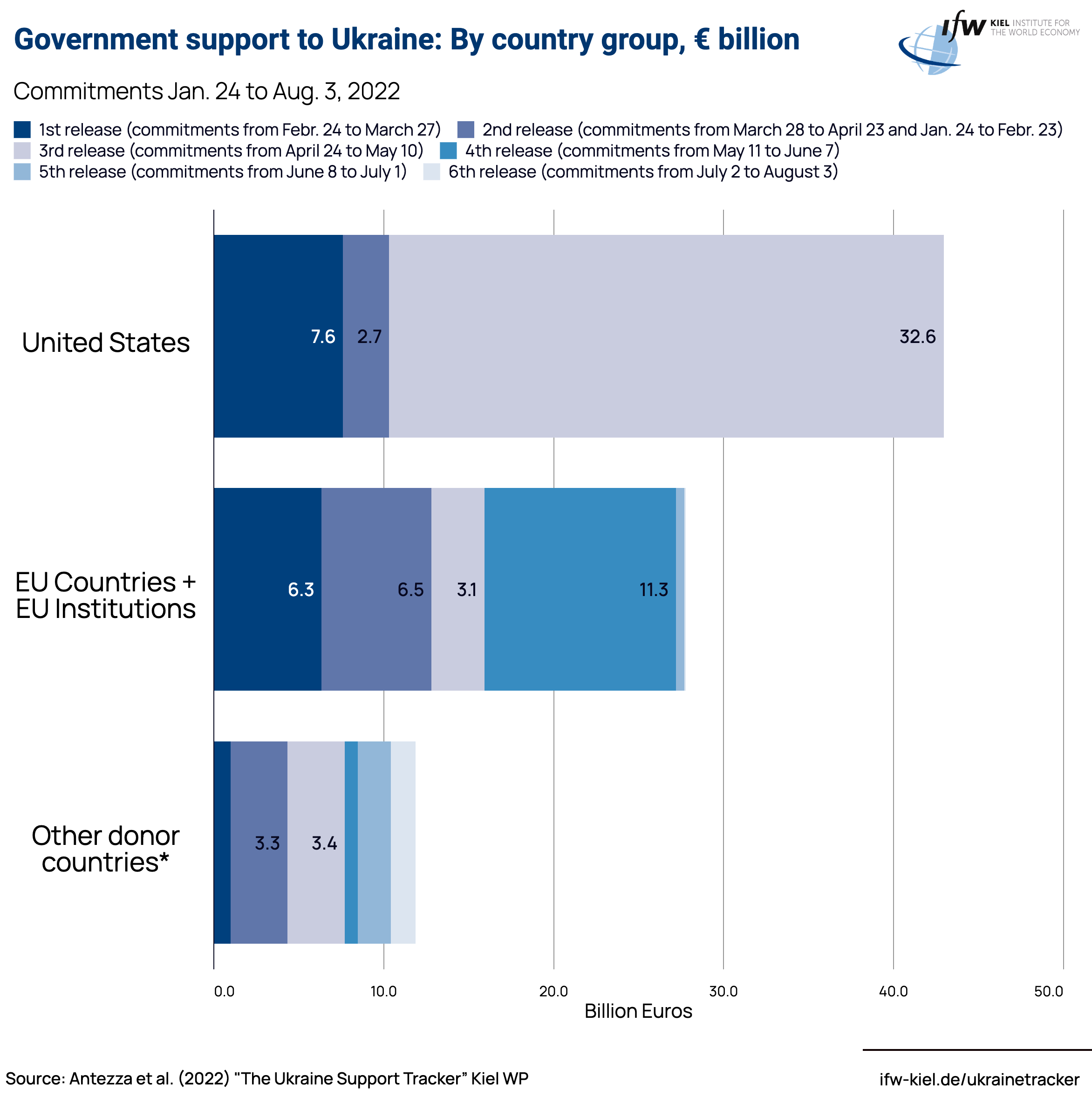