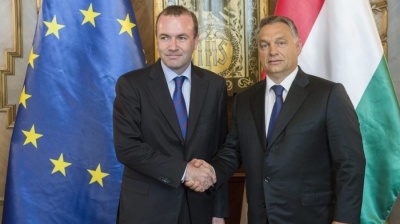 Manfred Weber, group leader of the European People's Party (EPP), will initiate talks with Hungary's Prime Minister Viktor Orban concerning issues around the EPP membership of Orban's Fidesz party, the German weekly Welt am Sonntag reported on March 8. The talks will be held before an assembly of EPP parties meets to discuss the fate of the ruling Hungarian conservative party.

Thirteen EPP member parties from 10 countries have written to the group’s leader demanding Fidesz be suspended, pending possible expulsion. Orban has been blamed for crossing red lines before, but the latest campaign by the Hungarian after scores of similar attacks seems to be the last straw for EPP leadership.

Weber said that he would "want to make it clear to Orban that he is currently on a path out of the EPP". Weber added that the dispute was not about "a conflict between East and West or migration policy" but about the fundamental values of the EPP and the European Union.

The conservative top European candidate has set three conditions for Orban to avert expulsion. He called for the immediate and definite stop of the campaign against Brussels. Orban needs to apologise to other EPP member parties and ensure the existence of the Central European University in Budapest.

Government officials announced on Thursday that the billboard campaign will end as of March 15. Previously Orban said posters depicting Juncker would be replaced with ones showing Frans Timmermans, the lead candidate of the Party of European Socialists, but apparently, amid the controversy this plan was dropped. Instead, the cabinet will advertise its family support programme on billboards.

Speaking to state-owned media on Friday, Orban referred to calls to expel his party from Fidesz as attacks by pro-migration forces. He named the opposition within the centre-right group "useful idiots".

The prime minister insisted that those forces seek to "turn the whole EPP into an international pro-migration organisation" while "the Hungarians want to thwart that". "No compromise is possible when it comes to migration and protecting Christian culture," Orban said.

Orban to approach PiS for alliance?

Orban for the first time has spoken openly about the forming new alliances "We have multiple options," he said, adding that it will be Fidesz that decides whether to stay or leave the EPP.

"There are big discussions going on," the prime minister said, revealing that he spoke with Juncker earlier this week, as well as Weber and other leaders. There will be another conversation with Weber, he said.

The PM repeated his position that he was seeking to reform the EPP so that it also embraces anti-migration forces but “this dispute might reveal that our place is not within the EPP but outside", he said.

"If it turns out that we need to come up with a new initiative in Europe, the first place we will have talks is Poland," Orban said, referring to Poland's Law and Justice party (PiS), which is not a member of the EPP.

Poland has remained an important ally for Orban even as he has become increasingly isolated in Europe. There are Article 7 procedures ongoing against both countries but Warsaw and Budapest both confirmed they would veto if there is a vote on sanctions against the other country.

A government spokesperson announced on Saturday that Polish Prime Minister Mateusz Morawiecki accepted the invitation from Orban to speak at the official celebrations of Hungary's national holiday on March 15, marking the start of the anti-Habsburg revolution in 1848. Orban has not refrained from bashing Brussels in speeches on such occasions.

In last year's commemoration just three weeks before the general election, Orban positioned himself and Hungary as the defender, the last bastion of Europe. “On the on hand, there are the patriots, the honest Christian, family-loving people and then the anti-democratic forces, backed by the global elite, George Soros, who believe in open society and mass migration and open-borders,” he said.

Orban has the backing of former Italian PM Silvio Berlusconi. The leader of Forza Italia reassured Orban in a telephone call on Friday that Forza Italia would not support the expulsion of Fidesz.